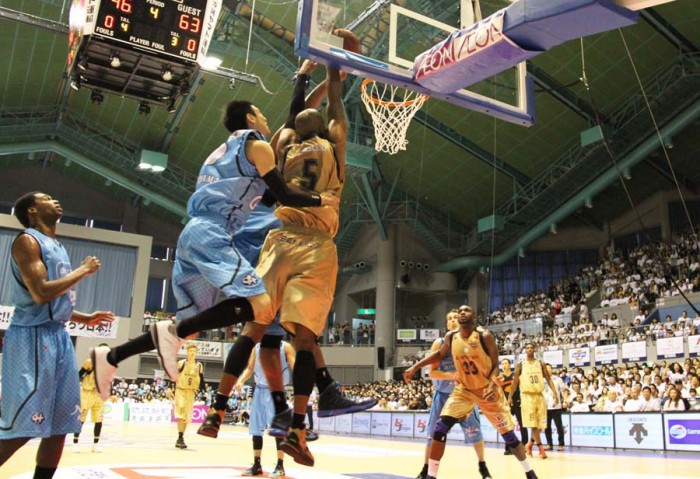 Anthony McHenry’s best efforts were not enough to stop Kyoto from winning on the tiebreaker.

“Shock and Awe” can be the only words to describe the meltdown by the Ryukyu Golden Kings in the semi-finals of the Basketball Japan League at the hands of a team that couldn’t beat the reigning champions all season. 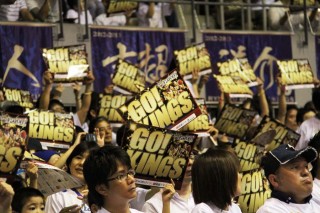 Boisterous Golden Kings’ fans were all ready to pack their bags for a trip to Tokyo’s Ariake Stadium for the championship games, but that was not to be, and the Kings’ winningest season ever was over.

The Kyoto Hannaryz came to Okinawa well the underdog, facing a formidable Okinawa team with a 42-10 season record…a team that had been beaten every time they met the Golden Kings this season.  The got on the plane to depart Sunday having vanquished the champions first by crushing the Kings 82-57 on Saturday, then staying alive a second game Sunday that propelled the series to a mini-tiebreaker.

Okinawa won the second game 90-60, and appeared to be back to their winning ways, playing aggressively and forcing turnovers from Kyoto.  Okinawa’s Kosuge popped in four three-pointers in the first quarter alone to lead the home squad. 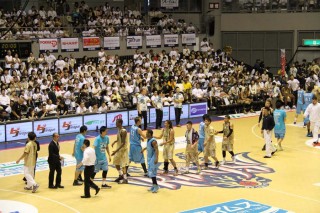 When it’s all over there’s only a handshake and congratulations to the winners to do.

And then came the mini-tiebreaker, with the home crowd boisterous in belief their guys could pull off the ten-minute win.  The Golden Kings raced to a 9-3 lead, but tripped and stumbled in the second half of the tiebreaker and lost.

The best scoring team with the best record in the league, and the winner of the Western Conference Championship, is out.  The Kyoto Hannaryz head to the finals in Tokyo’s Ariake Colosseum on May 18th and 19th.  The Hannaryz are the 5th ranked team in the Western Conference.  They’ll go against The Western #2 team, the Rizing Fukuoka, Niigata Albirex BB, the Eastern top seed, and the Yokohama B-Corsairs, the Eastern 2nd seed.