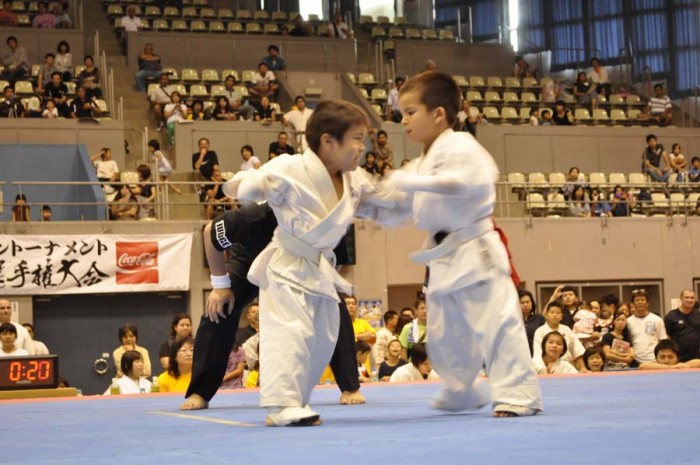 Starting early is important, and the Fighting Karate open Tournament has categories for competitors of all ages.

The main arena of the Ginowan Civic Gymnasium is the venue for the Fighting Karate Open Tournament on May 26th.

Doors to the Sunday events, which are free to the public, open at 9 a.m., with competition getting under way at 10 a.m. 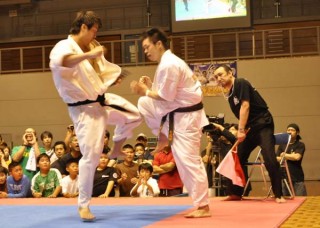 “Byakuren Kaikan” origins come from Chinese Shaolin martial arts and not Karate, although the organization calls itself a “karate organization.”

Byakuren Kaikan, a Karate organization with more than 60 branches scattered across Japan, is sponsoring this annual tournament. This Karate organization is the party of the Chinese martial art, which Masayasu Sugihara established in 1984. The uniqueness of “Byakuren Kaikan” is that it’s origins come from Chinese Shaolin martial arts and not Karate.

Therefore, it consists of both hard methods and soft methods. The hard method is poking, kicking, etc., while the soft method is throwing, sub mission, etc. There is a close resemblance between these two methods and the style of Chinese Shaolin martial arts. However, the “Byakuren Kaikan” calls itself a “karate organization.”

In this tournament, many fighters gather from all areas throughout Okinawa, and they vie in the strength. There are four “Byakuren Kaikan” dojo branches in Okinawa, which are located in Ginowan, Naha, Urasoe, and Okinawa City.

Karate began as a common fighting system known as te among the Pechin class of the Ryukyuans. After trade relationships were established with the Ming dynasty of China in 1372, some forms of Chinese martial arts were introduced to the Ryukyu Islands by the visitors from China, particularly Fujian Province.

A large group of Chinese families moved to Okinawa around 1392 for the purpose of cultural exchange, where they established the community of Kumemura and shared their knowledge of a wide variety of Chinese arts and sciences, including the Chinese martial arts. The political centralization of Okinawa in 1429 and the policy of banning weapons, enforced in Okinawa after the invasion of the Shimazu clan in 1609, are also factors that furthered the development of unarmed combat techniques in Okinawa.

There were few formal styles of te, but rather many practitioners with their own methods. One surviving example is the Motobu school passed down from the Motobu family by Seikichi Uehara. Early styles of karate are often generalized as Shuri-te, Naha-te, and Tomari-te, named after the three cities from which they emerged. Each area and its teachers had particular kata, techniques, and principles that distinguished their local version of te from the others.

Members of the Okinawan upper classes were sent to China regularly to study various political and practical disciplines. The incorporation of empty-handed Chinese Kung Fu into Okinawan martial arts occurred partly because of these exchanges and partly because of growing legal restrictions on the use of weaponry. Traditional karate kata bear a strong resemblance to the forms found in Fujian martial arts such as Fujian White Crane, Five Ancestors, and Gangrou-quan. Many Okinawan weapons such as the sai, tonfa, and nunchaku may have originated in and around Southeast Asia.

Sakukawa Kanga had studied pugilism and staff fighting in China, according to one legend, under the guidance of Kosokun, originator of kusanku kata. In 1806 he started teaching a fighting art in the city of Shuri that he called “Tudi Sakukawa,” which meant “Sakukawa of China Hand.” This was the first known recorded reference to the art of “Tudi”. Around the 1820s Sakukawa’s most significant student Matsumura taught a synthesis of te (Shuri-te and Tomari-te) and Shaolin styles. Matsumura’s style would later become the Shaolin-Ryu style.

Matsumura taught his art to Itosu Anko, among others. Itosu adapted two forms he had learned from Matsumara. These are kusanku and chiang nan. He created the ping’an forms which are simplified kata for beginning students. In 1901 Itosu helped to get karate introduced into Okinawa’s public schools. These forms were taught to children at the elementary school level. Itosu’s influence in karate is broad. The forms he created are common across nearly all styles of karate. His students became some of the most well known karate masters, including Gichin Funakoshi, Kenwa Mabuni, and Motobu Choki. Itosu is sometimes referred to as “the Grandfather of Modern Karate.” In 1881 Higaonna Kanryu returned from China after years of instruction with Ryu Ryu Ko and founded what would become Naha-te. One of his students was the founder of Goju-ryu, Chojun Miyagi. Chojun Miyagi taught such well-known karateka as Seko Higa (who also trained with Higaonna), Meitoku Yagi, Miyazato Eiichi, and Seikichi Toguchi, and for a very brief time near the end of his life, An’ichi Miyagi (a teacher claimed by Morio Higaonna).

In addition to the three early te styles of karate a fourth Okinawan influence is that of Kanbun Uechi.  At the age of 20 he went to Fuzhou in Fujian Province, China, to escape Japanese military conscription. While there he studied under Shushiwa. He was a leading figure of Chinese Nanpa Shorin-ken style at that time. He later developed his own style of Uechi-ryu karate based on the Sanchin, Seisan, and Sanseiryu kata that he had studied in China.