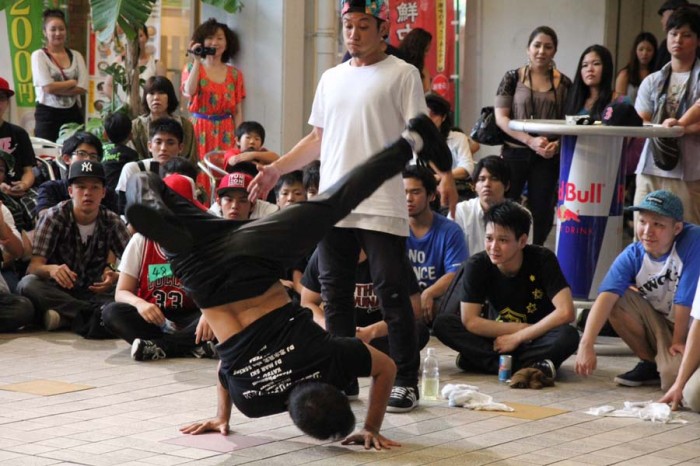 Spectators watch when street dancer put on their best moves at Music Town on May 25.

Entrants are still being sought for the Saturday, May 25th Koza Street Dance Festa taking place in the Music Space in Koza Music Town Oto-Ichiba. 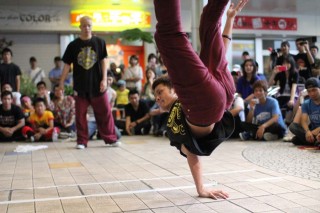 Audience cheers their favorite performers as they compete.

Entries are being accepted 11:30 a.m. ~ noon, with the dancing getting under way at 1 p.m. and running through early evening.  Spectator participation is free.  KSDF this time will hold B-BOY 1on1 BATTLE, from which a champion will acquire the tournament seed to “Red Bull BC One Japan Cypher” held in Tokyo on August 25th, and will participate as the representative of Okinawa.

Who will gain the crown of “Red Bull BC One” which determines the No.1 B-Boy of the world, and who gains the ticket to which it challenges to the world? 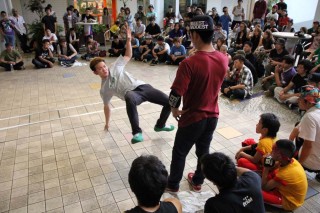 The winner of the contest gets the right to go to the championships in Tokyo.

That’s going to depend on who signs up to compete.  Details are at the official website http://www.redbullbcone.com/home, or by calling (098) 932-1949 and talk to Music Town Oto-Ichiba.

Since its birth in the late 70s, B-Boying has been announced dead several times, but it’s still alive and kicking, very much so! Today a vibrant and well connected B-Boy scene exists worldwide. One of the most important B-Boy competitions is the Red Bull BC One, where 16 of the world’s best B-Boys meet to compete and to determine in a 1-on-1 knock-out-battle who is “The One.” 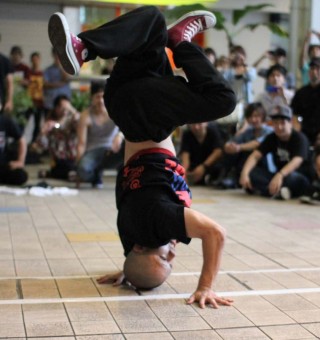 The challenge is to find dancers from all continents ready to set new standards and show state of the art breaking.

Extraordinary artistic skills, an outstanding character, and a good reputation in the community are the success formula to get selected as a dancer for the Red Bull BC One. The challenge lies in finding influential dancers from all continents ready to set new standards and show state of the art breaking.

B-Boy battles have their roots in 1-on-1 competitions. During the past 15 years these 1-on-1 battles have been pushed to the background as crew competitions became more popular at the big events. Red Bull’s objective was to go back to the roots and show B-Boying in the most spectacular and powerful way.

The first Red Bull BC One was hosted in 2004 in Switzerland. Since then, the annual competition has moved from Germany to Brazil, South Africa, France, USA, Japan, Russia, with last year’s event being held in Rio de Janeiro, Brazil.

In 2013, the world final will move to Korea. Around 60 national Cyphers, leading up to 6 regional finals will help to determine the 16 B-Boys to compete for the legendary belt this year. The Red Bull BC One title remains the most coveted prize in B-Boying, and celebrates its tenth anniversary this year. Let the battle begin.