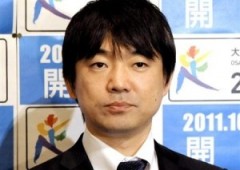 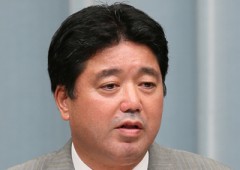 Toru Hashimoto, mayor of Osaka and co-leader of Nippon Ishin no Kai (Japan Restoration Party), traveled to Okinawa last Tuesday for a three-day visit, during which he was expected to sign a policy agreement with a local political group that supports relocation of the Futenma military base within the prefecture.

Hashimoto met with former Diet member Mikio Shimoji, who heads Sozo (the Political Group of Okinawan Revolution). On Wednesday, Hashimoto and Shimoji agreed to a policy of relocating Futenma to the Henoko coastal area in the city of Nago in a move apparently boosting the two sides’ cooperation as they move toward the Upper House election.

Nippon Ishin does not have an Okinawa branch and in last December’s Lower House election, its candidates lost all four seats. Shimoji, formerly of Kokumin Shinto (People’s New Party), also lost his seat and is expected to run in the Upper House election. His party wants to cooperate with Hashimoto, although in what capacity remains to be decided.

“If Sozo seeks our support, we’ll respond,” Osaka Prefecture Gov. Ichiro Matsui told reporters in Osaka late last week.
Shimoji has over the years advocated alternatives to the current Henoko plan. In 2010, while with Kokumin Shinto, he made two proposals involving base-related construction in Okinawa, including integrating Futenma with nearby Kadena Air Base.
He was criticized in Okinawa as more interested in the profits of local and mainland construction companies than in a realistic solution to the base issue. Shimoji is a former vice president at Daiyone, Okinawa’s second largest construction company, which was founded by his father.

Hashimoto, on the other hand, has offered contradictory solutions to the Futenma issue. In 2009, while Osaka governor, he said that if approached by the central government he would discuss relocating Futenma to Kansai International Airport. He later switched his position, saying that because Kansai and Itami airport’s management was going to be integrated, the situation had changed.

As head of Nippon Ishin, Hashimoto has become a strong supporter of the Henoko relocation plan.
“There is no other option (besides Henoko) for a replacement facility,” Hashimoto said at a Nippon Ishin convention in March.