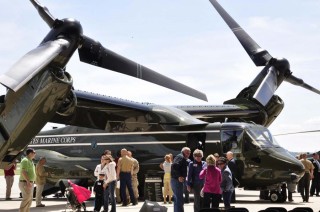 The helicopter squadron responsible for carrying the President of the United States and his staff, Marine Helicopter Squadron One, has received its first of 12 MV-22 Ospreys to be assigned to its fleet at Marine Corps Base Quantico in Virginia.

There are currently 12 MV-22 Ospreys assigned to Futenma Marine Corps Air Station in Ginowan, with another squadron of 12 due to arrive this summer.  The Marines are already using the tilt-rotor aircraft in a variety of training operations both on Okinawa and throughout the Pacific.