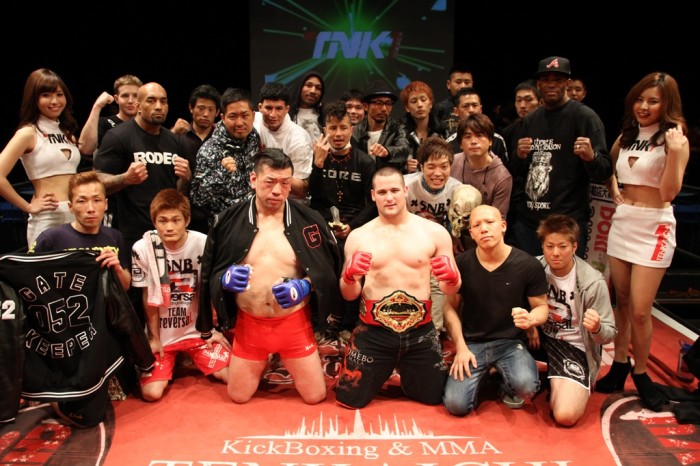 Jujitsu skills are on display Sunday afternoon at the Tenkaichi Super Fights in Koza Music Town, when the welterweight title match is on the line.

Which of Jujutsu fighters is the strongest?  The event will be held on Sunday at Music Town Sound market in Okinawa City, and doors will open at 3:30 p.m., amateur matches will start from 4 p.m., and the Super Fight will start around 5 p.m.

The winner of the tournament will be able to challenge to fight the champion of the class, called Mr. Kamikaze.  Kamikaze is 47 years old, but he is one of the great champions because he has reportedly fought some 200 matches and never lost. Many fighters want to fight Mr. Kamikaze.

Of the four fighters that have entered the tournament, Tenshoyama has enough experience to win over Kamikaze, so if he wins the tournament, it is possible that he can defeat Kamikaze.

Hiroto will fight Takeru Shimizu, who is a MuayThai fighter, and the WPMF Japan Super Welterweight Champion, and the 5th contender in the WPMF World Super Welterweight class. This match, the battle between current champions for the first time in Okinawan martial arts history, will give the winner of the match two titles, Japan MuayThai Champion and Japan Kickboxing Champion. This match is recognized by WPMF, the World Professional MuayThai Federation in Thailand that has jurisdiction of MuayThai everywhere in the world.

A lot of people from Okinawa and mainland will come to watch the biggest match, so super ring seat tickets are already sold out! The president of World Seaser, Shikou Tomaru said “The match is really big! We hope no one will miss this match.” And Tomaru added “Of course other matches will be really exciting, too. We expect that you will see many knock out fights. So please come and enjoy!”

The event this time, 3~5 matches on MMA rules, 12 matches on kickboxing rules and 9 matches on amateur rules, will be held, so spectators will have their money’s worth. RS tickets are ¥4,500 or $50, and general tickets go for ¥3,500 or $40.  Tickets are available at the Mail Centers on Kadena Air Base and Camp Foster.

Announcements in English are provided at the event, so everybody who doesn’t speak Japanese and comes to watch the event for the first time will feel right at home, knowing what’s happening.