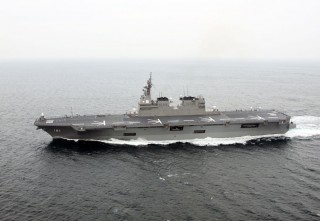 Destroyer Hyuga became the first Japanese MSDF ship that a U.S. military aircraft has landed on.

The Japanese Self-Defense Forces and the U.S. military conducted a joint exercise for island recapture off California earlier this week.

The exercise on California’s San Clemente Island in the Pacific Ocean assumed that remote islands in Japan are invaded by a neighboring country, at a time when China has repeatedly entered Japanese waters around the Senkaku Islands in Okinawa Prefecture. The SDF and the U.S. Marine Corps conducted the exercise to improve joint capabilities to recover captured islands. A landing operation using helicopters and hovercraft was shown to the media.

It was the first time that the Ground, Maritime and Air SDFs took part together in an island defense exercise in the United States. Expressing opposition, China has called for the cancellation of the exercise.  In the exercise, about 60 members of the GSDF’s Western Army Infantry Regiment, based in Sasebo, Nagasaki Prefecture, landed from two CH-47 heavy-lift helicopters onto the small island to join some 80 Marines already there.

An MSDF air cushion landing craft made a landing to bring in equipment, such as high mobility vehicles. The U.S. Navy’s Third Fleet in California and the I Marine Expeditionary Force, as well as some 1,000 SDF troops, took part in the day’s exercise, which is part of the U.S. military’s Dawn Blitz 2013 exercise. The Hyuga destroyer and the Atago Aegis ship of the MSDF were also present.

As a part of the exercise, a U.S. Marine Corps MV-22 Osprey made a first ever landibng on a Japanese Navy ship, destroyer Hyuga.

Lt. Gen. John Toolan, I MEF commanding general, told the press following the exercise that the U.S. military needs to be able to work with its allies to “make sure the secure environment,” underlining its work for peace and stability in the Pacific region.