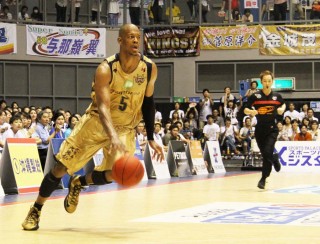 Anthony McHenry was the first one to renew his contract with the Rytukyu Golden Kings.

The Ryukyu Golden Kings  are wasting no time getting ready for the coming Basketball Japan League season, signing new contracts on some of its top players.

The Kings put together new contracts with Anthony McHenry on June  20th, Naoto Kosuge and Shigeyuki Kinjo on the 21st and Yoshiki Yamashiro and Morihisa Yamauchi on the 25th.  Okinawa’s also gearing up for the pre-season matches to be held on September 7th and 8th at Ginowan City Gym, and also another pair of pre-season games scheduled for September 25th and 26th at Okinawa Budokan.

McHenry says “I’m so glad that I can play in such a nice and great team. I’m sure I really do my best to win back the championship this season. We had really frustrating experiences last season, and I try to perfect my play to lead our team to the win.”  McHenry noted “I also appreciate that I can play in front of the greatest fan in Japan. Please keep cheering us on”.

Yamashiro says he’s “glad that I can play as a Kings’ member. I was injured last season and could not play for a long time, and that was so frustrating.”  He says that now, with “everyone’s support, it will put me to back to the court. In new season, we try our best with new head coach Tsutomu Isa, who has been with the team from the first year of the Kings.”

Yamauchi says “I’m so glad that I can wear the Kings uniform and play as a member of the Kings this new season. For fans in Okinawa, to boost up Okinawa, I will play and hustle like my style is, and try to contribute to the team. Please keep cheering us on in the new season!”