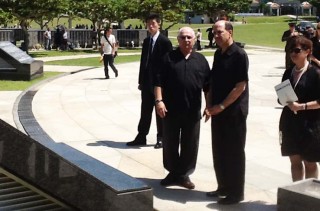 For the first time in almost two decades, the United States Ambassador to Japan joined in ceremonies commemorating the anniversary of the end of the 1945 Battle of Okinawa.

U.S. Ambassador John Roos joined both American and Okinawan ceremonies at the Peace Memorial Park in Mabuni, Itoman City, on Sunday, the first American ambassador to do so since Walter Mondale made the trek south from Tokyo in 1995.  Roos, accompanied by the American Consul General in Naha, Al Magleby, first spent a half-hour in ceremonies by some 50 American expatriates and military personnel at the wall recognizing Americans who died during the bloody three-month battle.

Roos spoke of the way Japan and the United States have bonded in the 68 years since World War II ended, setting up one of America’s strongest friendships.  He and American Chamber of Commerce President Walt Christiansen spoke, and then wreaths were laid at the wall by the ACCO, the United Services Organization, the Veterans of Foreign Wars, and the Girl Scouts.

The Okinawa Prefectural Government memorial service that followed was attended by some 5,800 people on the 68th anniversary.   At noon, Japanese Prime Minister Shinzo Abe, heads of both chambers of the Diet, and Okinawa Governor Hirokazu Nakaima offered silent prayers for the war dead together with other participants in the ceremony held at the Peace Memorial Park in the city’s Mabuni area, the site of the last bloodiest fight in the battle.

Foreign Minister Fumio Kishida and Defense Minister Itsunori Onodera also attended the ceremony, the first participation by Japan’s foreign and defense chiefs since its start in 1962.   Their attendance apparently shows the Abe government’s hope to obtain support for plans to transfer the U.S. Marine Corps’ Futenma Marine Corps Air Station within the Okinawa and deploy more Osprey tilt-rotor aircraft at the base.
Nakaima announced a peace declaration, saying that his prefecture will “inherit the lessons from the Battle of Okinawa” and push forward with efforts to realize lasting peace.   Masaharu Kina, chief of the Okinawa Prefectural assembly, said “we are reaching the limits of our patience with repeated unreasonable treatment by the national government,” referring to a call to Abe that representatives of all Okinawa municipalities made in Tokyo in January for the cancellation of Osprey deployment at the Futenma base.

Abe said in his address that concentration of U.S. military bases is still a huge burden on the people of Okinawa and that his government pledges to make every effort to reduce the burden.    The Battle of Okinawa, the only war on Japanese soil involving civilians during World War II, ended on June 23, 1945.    This year, 62 names were added to those of the battle’s victims inscribed on the Cornerstone of Peace in the park, bringing the total number to 241,227 . Okinawa fell to the U.S. after three months of bloody fighting in 1945.

The island prefecture remained under American control until 1972.  Vast tracts of the archipelago used by the occupying military remained under U.S. control after the handover and today still play host to around half of the 47,000 troops Washington has in Japan.