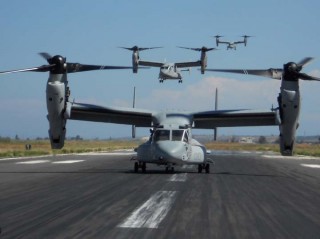 The Japanese government White Paper on defense sees the deployment of MV-22 Osprey to Okinawa as positive for deterrence.

Concerns about China’s repeated incursions into Japanese territorial waters around the Senkaku Islands in the East China Sea, and North Korea’s belligerent actions with threats of nuclear actions and missile launches, have taken top billing in a just-released Japan Defense White Paper.

In the report, submitted to a cabinet meeting by Defense Minister Itsunori Onodera, Japan also criticized China over an incident in January in which a Chinese warship locked a weapons-targeting radar on a Japanese Maritime Self-Defense Force destroyer.  Such an act could lead to an unexpected event and is thus dangerous, the report said. While Beijing has denied the radar lock-on, the Japanese report said the Chinese explanation is false.  The incident happened in waters near the Senkaku islands. The Japanese-administered uninhabited islands are also claimed by China, which calls them Diaoyu, and at the center of tensions between the two countries, although Japan does not officially recognize any territorial dispute over the islands.

The white paper also slammed an article published in May in the People’s Daily, a newspaper of the Communist Party of China, that the issue of sovereignty over Ryukyu, the former name of Japan’s southernmost prefecture of Okinawa, has not been settled yet.  The article appears to be raising a question about the fact that Okinawa is part of Japan, said the Japanese report.

The Chinese government has said that the nation’s military spending jumped four-fold over the past decade, but the white paper showed doubts, citing an analysis by the U.S. Department of Defense that the disclosed figures represent only part of China’s vast military expenditures. The Japanese report said China’s annual defense report released in April included more detailed descriptions on some topics than in previous reports, but was less transparent in other areas.

In the report, Japan condemned North Korea’s nuclear test in February, stressing that the action can never be permitted as it poses a serious threat to Japan’s security and could undermine peace and stability in Northeast Asia and the international community.
The Japanese defense report warned If North Korea develops a long-range ballistic missile based on the outcome of a missile test-firing last December, which the reclusive nation claimed to be an operation to launch a satellite, it could reach western and central parts of the U.S. mainland.

The report notes North Korea’s ballistic missile development program is believed to have entered a new stage and is therefore a pressing problem for the international society. The report stresses that under the circumstances, the U.S. military presence in the Asia-Pacific remains very important for the stability of the region.  At the same time, however, the report pointed to the possibility that the U.S. fiscal constraints could affect the nation’s military rebalancing toward the Asia-Pacific region.
The report reiterated Japan’s position that the Sea of Japan islands of Takeshima are inherent part of the country. The islands are under the effective control of South Korea, which calls them Dokdo, and the white paper warned against growing cyber attacks on the Web sites of governments and the military in the world, noting that such countries as China, Russia and North Korea are said to be responsible.

The report said that the 12 MV-22 Osprey transport planes deployed at the U.S. Marine Corps’ Futenma air station in Okinawa help strengthen the deterrence power of U.S. forces in Japan and significantly contribute to regional peace and stability. The Marine Corps plans to deploy 12 more Ospreys at the Futenma base.

The Japanese government’s annual report on national defense shows its sense of caution over China’s growing military buildup and maritime activities, reflecting the view of Prime Minister Shinzo Abe. Abe has vowed to lead the nation’s efforts to protect Japanese territory, waters and airspace amid the increasing challenge from China against Japan’s sovereignty over the Senkaku islands in the East China Sea.

To counter the Chinese challenge, the report called on Japan to strengthen its alliance with the United States and enhance its own defense capabilities. In a chapter analyzing eight countries and regions, the report sharply criticized China over its rows with neighboring countries concerning marine interests. “China has attempted to change the status quo by force based on its own assertion which is incompatible with the existing order of international law,” the report said, adding, “The attempts have been criticized as assertive and include risky behaviors that could cause contingencies.”

Japan’s sense of crisis increased particularly after a Chinese warship in January locked a weapons-targeting radar on a Maritime Self-Defense Force destroyer.  A Defense Ministry executive said the ministry obtained Abe’s prior approval for descriptions that could anger China.

Australian government officials who were briefed on the Japanese white paper in advance expressed concern about the strong language used to criticize China but Japanese officials replied that they only wrote facts, according to the ministry executive.
The defense white paper emphasized that Abe’s strong initiative led to a Japan-U.S. agreement in April on a clear roadmap for the return of some of U.S. military-occupied sites in Okinawa Prefecture, southern Japan.  In a column section related to discussions on a review to Japan’s defense guidelines, the report cited Abe’s remarks at parliament calling on the nation to gain capabilities to attack enemy bases and set up marine forces.