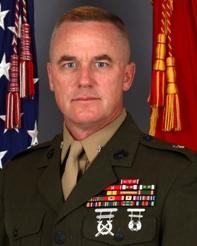 Maj. Gen. Frederick M. Padilla has relinquished his duties as the commanding general of 3rd Marine Division to Maj. Gen. H. Stacy Clardy III at a change of command ceremony aboard Camp Courtney.

Padilla assumed command of the 3rd Marine Division in July 2011. Under his command, 3rd Marine Division resumed rotational deployments of infantry battalions to Okinawa, part of the unit deployment program, which was suspended in 2003 due to personnel requirements needed to support Operations Iraqi Freedom and Enduring Freedom. The UDP increases participation in numerous exercises with allies and partner nations throughout the Asia-Pacific region.

Additionally, Padilla oversaw the start of regular U.S. Marine deployments to Australia, known as Marine Rotational Force Darwin, improving Australia-U.S. interoperability, and reflecting the enduring alliance and common security interests. Padilla’s next command will be at Headquarters Marine Corps where he will serve as the Director of Operations with Plans, Policies and Operations.

During his remarks, Padilla emphasized the actions of 3rd Marine Division’s Marines and sailors and offered his best wishes for the future. “I can’t tell you how proud I am of the division,” said Padilla. “The Marines and sailors of 3rd Marine Division are top-notch. I’m amazed at what you’ve accomplished … I will never forget you all, and I look forward to serving with you all in the future. God bless you.”

Clardy’s previous assignment was at Headquarters Marine Corps where he served as the Director of Operations with Plans, Policies and Operations.  Throughout his career, Clardy has participated in deployments Afghanistan, Iraq and Kosovo taking part in Operations Joint Guardian, Iraqi Freedom and Enduring Freedom.

During the ceremony, Clardy’s words revealed his excitement about leading 3rd Marine Division.  “I am so honored and humble to have this opportunity, but to get the chance to come here, to this inspiring division and take over for a good friend of mine is quite an honor for me,” Clardy told the troops. “I very much look forward to serving with the finest division in the Marine Corps, and I look forward to the challenges ahead.”