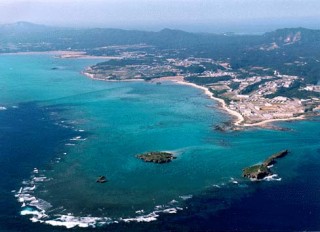 The landfill off Camp Schwab in Henoko is estimated to come with a price tag of ¥230 billion.

The Japanese government estimates that the reclamation of land needed for the transfer of the U.S. Marine Corps’ Futenma Air Station to the planned new location on Camp Schwab in Henoko would take five years and cost ¥230 billion.

The estimate is a part of a central government application for the landfill permit from the Okinawa governor for the transfer of the base in Ginowan to the Henoko coastal area in Nago. The application documents, including an environmental assessment, were made public by the Okinawa Prefecture government.

It is uncertain whether Okinawa Governor Hirokazu Nakaima will give the go-ahead to the land reclamation plan since many residents in the prefecture are against the base’s transfer to the Henoko area, and he has been seeking its transfer out of the prefecture.