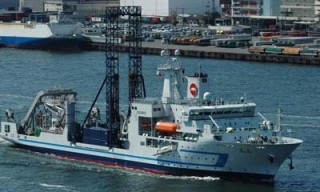 Geological survey ship Hakurei that is currently based in Okinawa has been ordered to prepare for possible deployment to the area near disputed Senkaku islands.

A pair of geological survey ships are now being loaded with supplies in preparation for deployment to the East China Sea.

The Japanese government has ordered the ships to be prepared to counter and observe Chinese-run oil firms if their drilling ships move into or near the disputed border.  Reports in Tokyo are that the Chinese are making their plans to expand gas drilling in the region.

Japan has ordered geological survey ships to prepare for possible deployment to the East China Sea after it detected Chinese drilling near the disputed maritime border, a source with direct knowledge of the order told Reuters.  A senior Japanese official says the survey ships, if deployed, would move “right up to the median line”, the disputed maritime boundary with China.

JOGMEC has two survey ships, the Shigen and the Hakurei. The Shigen is off the coast of Hokkaido in northern Japan and would take about a week to reach the East China Sea, said the source. The Hakurei is in Okinawa, not far from the disputed zone.

Direction has been given to the Japan Oil, Gas and Metals National Corporation (JOGMEC) to put both its survey ships on standby and to prepare to deploy without any foreign members of staff on board. According to one source, the Ministry of Economy, Trade and Industry, which gave the order, also declined to comment. The ministry would normally be in charge of such deployments.

Japan again last week warned China not to expand its gas exploration in the disputed area. Japan’s Chief Cabinet Secretary, Yoshihide Suga, says “If the Chinese side is to proceed unilaterally with development in the area over which there are conflicting claims, Japan would never accept it.” Japan appeared surprised to learn Chinese oil firms would soon ask Beijing to approve seven new gas fields in the East China Sea under a $5 billion expansion plan.

A spokesman for Prime Minister Shinzo Abe says “We are going to closely watch the Chinese side’s reaction to the concerns expressed by our side through diplomatic channels and we will think about our next step.” During Abe’s visit to Ishigaki island less than two weeks ago, he reiterated Japan’s stand that the nearby Senkaku islands, called the Diaoyu by China, are inherent Japanese territory, and added that he has no intention of conceding even one step.