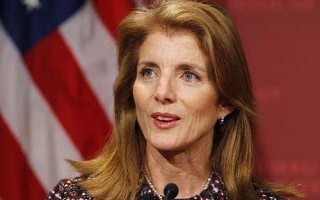 The daughter of the late American president John F. Kennedy is about ready to become U.S. Ambassador to Japan.

The 55-year-old Caroline Kennedy, an attorney and current president of the John F. Kennedy Library Foundation, will assume the post within the next few weeks, after being formally approved by the U.S. Senate.   She takes charge at the time Japan is set to join talks on the Trans-Pacific Partnership, the international free trade pact, and as realignment of U.S. military forces in Japan continues.

The White House is expected to formally announce the appointment any time.  She becomes the first woman to hold the critical diplomatic post in Japan.  The New York native, who supported President Obama in both his presidential election campaigns, had considered a run for the U.S. Senate seat in New York held by Hillary Rodham Clinton when she took the Secretary of State position, but backed off after media criticism of her lack of political experience and awareness of economic and national issues.

Kennedy’s close relationship with Secretary of State John Kerry, a key aide to her uncle, Senator Ted Kennedy, also provides her with political cover for the diplomatic post.  She’s the only living child of the former president, John F. Kennedy.

Ambassador Roos became the ambassador to Japan one month before the Democratic Party of Japan took office in 2009. He became the first U.S. ambassador to Japan to attend the annual peace memorial ceremonies in Hiroshima and Nagasaki for the victims of the atomic bombs dropped by the United States on the two cities in August 1945.  Roos also took part in the Hiroshima ceremony on Aug. 6, 2010, and in the Nagasaki ceremony on Aug. 9, 2012.  Last month he participated in the Okinawa Memorial Day ceremonies commemorating the end of the Battle of Okinawa.