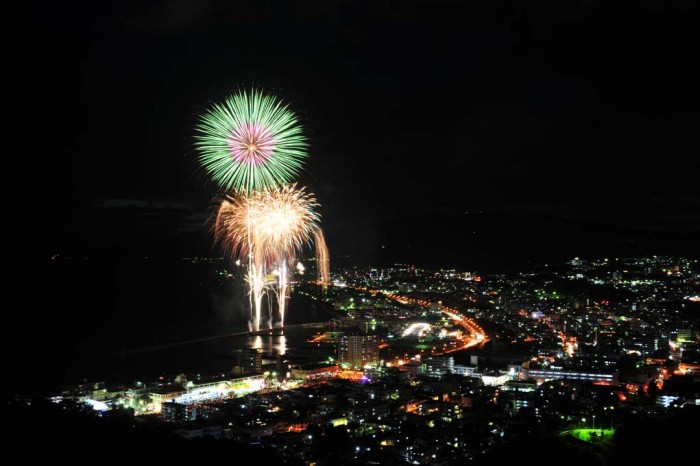 Nago Summer Festival ends with fireworks on both days that can be enjoyed from anywhere along Nago’s coastline.

Visitors to Nago Fishing Port are in store for a great weekend as the 36th Nago Summer Festival, a traditional Japanese summer event, unfolds across the two days.

The Saturday and Sunday festivities are free, with more than 60 stores and restaurants joining in the summer spectacular, which also includes live music performances during the daytime, and fireworks by night.  More than 1,000 pyrotechnics, including new large-size fireworks and a star mine, will be launched as the evening finales. The Nago Summer Festival runs 1 p.m. ~ 9 p.m. Saturday and 9 a.m. ~ 9 p.m. on Sunday. 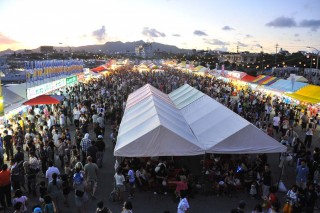 The fireworks are everyone’s favorites, and with the fireworks launched only about 500 meters from the main festival site, its resounding explosions are dynamic. More than 60,000 people turned out for last year’s Summer Festival, and organizers expect at least as many for the shows this year. Orion Breweries, with its base located in Nago, has cooperated in this festival each year.  In fact, at one point, this festival was called “Nago Orion Beer Festival”.

Since it’s supported by Orion, many servers of Orion Breweries stand in a line.

Many stalls also stand in a row and visitors can choose from time-tested menus, including broiled sweet corn, octopus dumplings, yakitori, fried noodles, and popcorn.

Fireworks are the finale both evenings, and they’re extremely popular. About 1,000 fireworks will be launched each evening.  Since the launch is from the sea at the Fishing Port, all visitors can watch them from anywhere along the seashore in Nago. Parking is readily available.