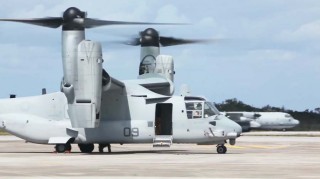 Because of stiff local opposition to Osprey MV-22 aircraft in Okinawa, Osaka Mayor Toru Hashimoto and Osaka Governor Ichiro Matsui are proposing moving some drills to airports and Japanese Self Defense Force bases in Kansai region.

The two leaders believe that the national government should consider whether training flights by Osprey tilt-rotor transport aircraft, based at the U.S. Marine Corps’ Futenma Marine Corps Air Station, could be accepted at airports or Self-Defense Force bases elsewhere in Japan.

Hashimoto, co-leader of the opposition Nippon Ishin No Kai (Japan Restoration Party), and Matsui, secretary-general of the party, put forward the proposal at a meeting of the Union of Kansai Governments, which consists of seven prefectures and four cities in the Kansai western Japan region.

At the meeting, Hashimoto and Matsui said they have proposed to the national government early in June that part of the Osprey training be transferred to Osaka Prefecture’s Yao airport. They said that in order to help reduce Okinawa’s base-hosting burden, the Kansai union should take action.

Hashimoto and Matsui met with Prime Minister Shinzo Abe to discuss the idea, and Abe said that the proposal is worth a closer look.

However, the meeting was unable to reach an agreement on their proposal, though, partly due to concerns over negative effects on the feelings of officials and residents of the city of Yao.

Yao Mayor Seita Tanaka had rejected the proposal beforehand a day earlier. Tanaka rejected the idea saying that the safety of the Osprey “has not been proved.” The mayor also said that the local airport is located in a crowded residential area.