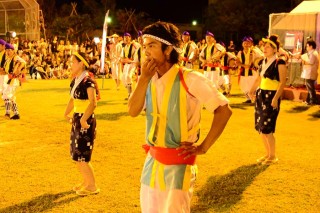 Eisa Nigths are conducted at various locations through mid-August.

Saturday’s event, in which various organizations within the prefecture participate, begins at 8 p.m.  The event is free. This is the season’s second program, with the first having started in the middle of June.  The programs run through the middle of August .

The “Eisa Night 2013 at Oto-Ichiba” is an event, in which visitors can admire innovative and dynamic Eisa performances, directly feel the intense rhythm of Eisa, which is an integral part of the traditional culture of Okinawa Prefecture.

Eisa is a form of folk dance originating from Okinawa. Its origin is the Bon dance that is performed by young people of each community during the Bon festival to honor the spirits of ancestors. It underwent drastic changes in the 20th century and is today seen as a vital part of Okinawan culture. 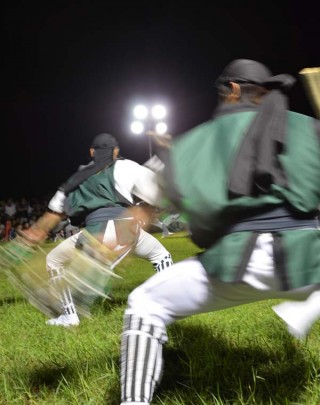 Each Eisa group has their own uniforms and moves.

Eisa as we see today is danced by groups of 20–30 young men and/or women, mainly in a circle to the accompaniment of singing, chanting, and drumming by the dancers, and folk songs played on the sanshin. Three types of drums are used in various combinations, depending upon regional style: the ōdaiko, a large barrel drum; the shimedaiko , a medium-sized drum similar to ones used in Noh theatre; and the pārankū , a small hand drum similar to ones used in Buddhist ceremonies. The dancers also sometimes play small hand gongs and yotsutake castanets.