The big question: What’s next for Abe? 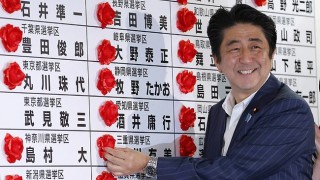 Prime Minister Shinzo Abe was able to secure a resounding victory for his LDP in Sunday’s Upper House election but his real contest is just only beginning.

Economic revitalization is a key task that Japanese Prime Minister Shinzo Abe needs to address after his Liberal Democratic Party enjoyed a sweeping victory in the House of Councilors election on Sunday.

Abe is determined to flesh out the government’s economic growth strategy further and put measures in his strategy into practice. To enact relevant bills, Abe aims to start an extraordinary Diet session in mid-October.   Other key tasks include whether to carry out a cabinet reshuffle toward late September, when the LDP’s executives reach the end of their term, as well as whether to implement a planned consumption tax hike to 8% from 5% in April 2014 as scheduled.

Speaking in a television program Sunday night, Abe stressed his determination to strengthen Japan’s economy. “We must respond to the voice of the public calling for tangible benefits of our economic policy steps,” the prime minister said.   In a different TV program, Abe praised what he sees as the significant contribution of DPJ Secretary-General Shigeru Ishiba to the election victory, signaling his readiness to keep Ishiba at the party’s No. 2 post.

Abe’s term of office as LDP president will continue until September 2015. House of Representatives lawmakers will not reach the end of their term until 2016 and the next Upper House election will not happen until that year.   This means that Abe has now secured a stable political foundation at least for the coming two years as a result of Sunday’s Upper House poll.

For three days from Thursday, Abe will visit three Southeast Asian countries. On Aug. 2, his government will convene a special Diet session to pick new leaders of the Upper House. Some key issues may be handled during the session, including legislation to give welfare recipients incentives for ending their reliance on state support.   In the second extra Diet session expected for autumn, Abe will submit important economic bills, such as one to enhance industrial competitiveness and one to implement sweeping reforms of the power industry.

The government will discuss tax breaks to promote business investment, which have been sought by business leaders, by holding meetings on annual tax system reforms earlier than the usual period near the year-end.   Regarding deregulation, Abe needs discussions with LDP members because it is a thorny issue.

On the planned consumption tax hike, Abe told a TV program that he will decide whether to implement the plan by examining upcoming economic data. Gross domestic product data for April-June will be released in mid-August.   The tax hike is essential to achieving Japan’s promise to halve the size of the nation’s primary budget deficit relative to GDP from the fiscal 2010 level by fiscal 2015 ending in March 2016 and generating a surplus by fiscal 2020. How to ensure the fiscal consolidation while buttressing the economy is challenging. Regarding Trans-Pacific Partnership free trade negotiations, Abe said Japan aims to maximize the benefits it would receive while trying to protect what must be protected. Tokyo l joined the TPP talks on Tuesday.

Abe called for careful talks on a controversial issue of constitutional revisions after his Liberal Democratic Party achieved its sweeping victory.   In television programs after the poll, Abe reiterated his desire to revise Article 96 of the constitution to make it easier for the Diet, or Japanese parliament, to propose broader constitutional amendments, but Abe expressed his readiness to spend enough time to form a consensus on the proposed changes to the constitution, saying it still seems necessary to have “broad and deep” discussions on the matter.

New Komeito, the LDP’s partner in the ruling coalition, favors amendments mainly to reflect new values, such as environmental rights, in the constitution. The small party opposes any change to war-renouncing Article 9 or a revision to Article 96 that precedes any other possible amendments.   Some opposition parties favor constitutional amendments. The LDP, New Komeito, Your Party, Nippon Ishin No Kai, the Japan Restoration Party, and the New Renaissance Party occupied a two-thirds majority combined, enough to propose a constitutional change. Your Party says priority should be placed on administrative reforms rather than on constitutional revisions.

Underscoring the importance of changing Article 9, Abe told TV programs that it is unreasonable that the Self-Defense Forces are not mentioned in the constitution.  Abe said, though, that more efforts must be made even toward a proposed revision to Article 96 that the LDP hopes to carry out in the first place.   To prepare the ground for the Article 96 amendment, Japan must deal with some important tasks, including a lowering of the minimum voting age, Abe added.