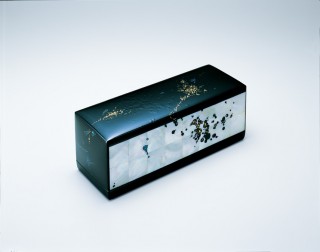 The exhibition is being held for the first time in 17 years at the Urasoe City Art Museum, 1-9-2 Nakama, in Urasoe City.  The exhibition is open daily 9:30 a.m. ~ 5 p.m. except Fridays, when the museum remains open until 7 p.m.  General Admission is ¥600, but ¥300 for college students and free for younger students.

This year’s exhibition introduces 106 works such as prize-winning works and a living national treasure’s work chosen from national applications.  Visitors can appreciate the results of Japanese lacquer art, which usually cannot be seen in the prefecture. Works, which are very impressive, such as the coating, beauty of a pattern, and formal are on display.