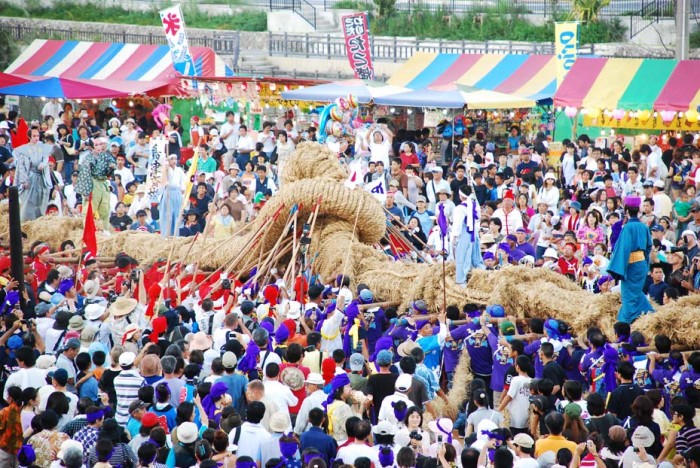 The second the two ropes are joined and the joint drops to the ground the pulling starts.

Admission is free for the two-day festival, which runs 3~9 p.m. on Saturday and 9 a.m. ~ 9 p.m. on Sunday.  Free parking is available for 200 cars.  Opening ceremonies make the festival official at 3 p.m., followed at 5 p.m. with the All Island Sumo Competition.  Mayumi Yamakawa & Shima Girl Ten perform at 8 p.m. 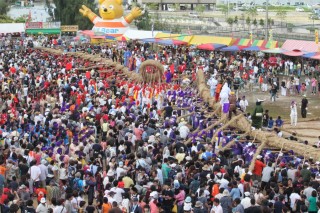 Tens of thousands people come to witness the Yonabaru tug-of-war, the second largest in Okinawa, this Sunday.

The Kids Tug of War kicks off Sunday at 9 a.m., followed at 2 p.m. by the Kids Eisa performance. The Precession leading up to the Tug of War starts on Route 330 at 4 p.m., with the actual Tug of War beginning at 5 p.m. on Route 329.  The Yonabaru Fighter Three Show is at 6:30 p.m., Itarashiki Eisa at 7 p.m. and a musical live performance with Southern Band Okinawa at 8 p.m.  Fireworks cap the festival activities at 8:45 p.m.

It is said that “The Yonabaru Tug Of War Festival” started in the time of King “Shoei” of Ryukyu Kingdom (1573~1588). It is a festival during which people pray to God for a good harvest. People celebrate the crop of the previous year by combination of two ropes divided into east and west, and divine rich or poor harvest by the result. The rope is 90 meters long and weighs about 5 tons.

The moment the rope is joined together, the locking pole –kanachi– entered, and it hits against the ground, this tug of war starts. Teams take to the offense and defense while pulling each other’s rope from east and west.
It is said that persons participating in the tug of war receive god’s blessings, such as being healthy and gaining prosperity.