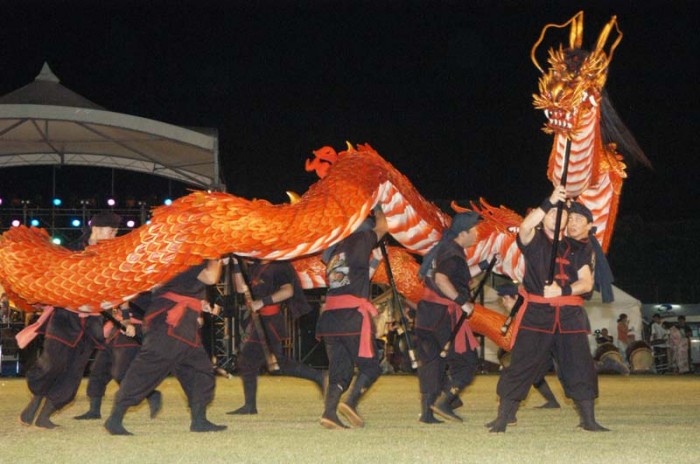 Urasoe Tedako Festival has an emphasis on cultural entertainment besides the usual food and game booths.

It’s not the largest festival on Okinawa, but a visit to Urasoe City’s annual celebration is like revisiting a county fair in midtown America.

The 36th annual Tedako Matsuri kicks off Friday evening, July 26th, on the city’s Yafuso Street that will be closed to the traffic from 5 to 10 p.m. The opening night festival has pageantry, entertainment, music, and of course, food. It’s Urasoe City’s biggest event of the year, and they’ve invited the international community to bring the families and enjoy a bit of Okinawa culture. 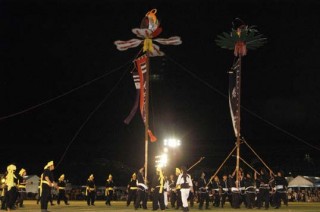 Youth groups show their prowess in carrying and controlling “hatagashira.”

A plus for many military families is the convenience of having a major festival practically in the back yard. Urasoe is centrally located near Camp Kinser, just south of Kadena Air Base and Camps Lester, Foster, and Futenma.

The three-day Tedako Festival, with Tedako meaning ‘children of the sun’, pays homage to a powerful king of the ancient Ryukyu before it was united into one kingdom. King Eiso had his court in Urasoe, with the royal castle now in the Urasoe Castle Ruins Park. The festival begins one week from tomorrow with taking the fire from the sun at the castle ruins.  Friday evening’s opening runs 5 p.m. ~ 9 p.m., with Saturday and Sunday festivities starting at 9 a.m. and running through 9 p.m.  The block party runs through the evening.

Festival action moves to Urasoe Sports Park on Saturday starting with the Senior Citizen’s Club Karaoke Contest at Tedako Large Hall at 9 a.m., followed from10:30 a.m. ~ 3 p.m. with the 9th Urasoe Mayor’s cup Children’s Sumo Competition  at the Urasoe civic sumo ring.  There’s also the Senior Citizen’s Club Ring Toss Contest at the Social Welfare Center at 1 p.m.  The  “Tedako-bi” Flame Lighting Ceremony at Iso Castle Ruins Park gets under way at 2 p.m.  The Children’s Carnival on the Main Stage at the Festival Grounds begins at 5:30 p.m. and the Ai Banjo Live Performance starts at 6 p.m.  Opening ceremonies on the main stage are at 6:30 p.m.

The Picture Scrolls Of The Three Great Urasoe Kings starts at 7:10 p.m. on the Main Stage at the Festival Grounds, followed by the Great Fireworks Show at the Main Stage beginning at 8:40 p.m.

There’s something for everyone throughout the afternoon at locations within the Urasoe Athletic Park, so take your cameras to capture the spectacular action.