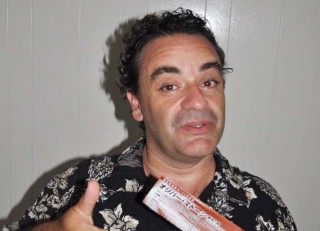 Pietro Scozzari is from Bologna, Italy, who has lived on Okinawa over a year, starting 2011 with shuttling between Italy and Okinawa. Currently he’s a resident of Naha. He won the JU raffle this week, and is looking forward to going to hear a panel discussion about U.S. Military bases on Okinawa featuring a presentation by American Film Maker Oliver Stone.

Pietro describes his hometown Bologna as an old, nice place that has great food, and plenty of traditions. “It’s about the same size as Naha,” he explains.

Of his life in Okinawa he says that it’s mostly quiet, relaxed, and definitely hot. His favorite local food is Gyoza but, “My wife never makes them!” he rues.

When talking about what he thinks are the best points about Okinawa, he lists a long list, “For me it’s the people, traditional houses, Shisa, taiko drums, Eisa, Begin (a band from Ishigaki) and forests in Yambaru.” But he is quick to add, “I would like Okinawans to be more sensitive towards cats living on the streets and protect them! They should develop a program for that.”

And if he ever gets a chance, he would like to visit Hokkaido some day.