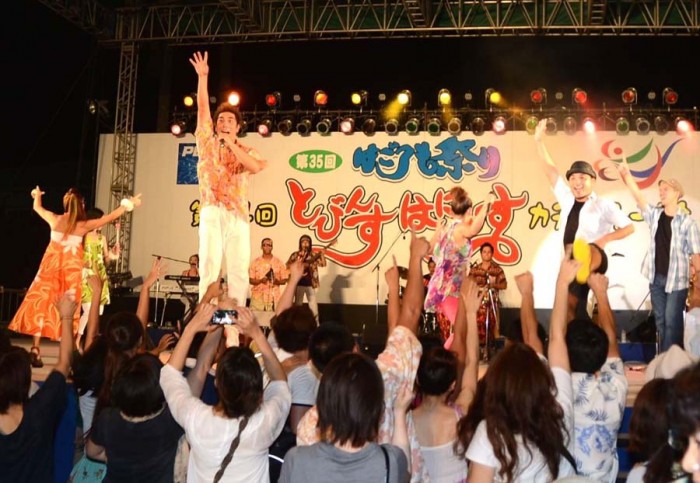 The highlight of the annual Ginowan Hagoromo Festival is the Kachashi contest on Sunday that anyone can take part in.

Ginowan City’s the place to be this weekend, as the central Okinawa city celebrates its 36th annual Hagoromo Festival, an event that traditionally draws more than 100,000 spectators. 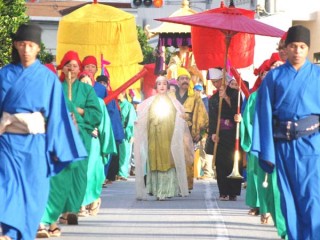 A colorful parade depicting historical events takes place on the street outside the Convention Center on Saturday.

With the concepts of international harmony and friendship as a backdrop, Saturday and Sunday’s festival at Kaihin Park near the Okinawa Convention Center, organizers have a full slate of top notch entertainers geared up to perform, as well as the ever-popular Kachashi competition. Opening ceremonies lead into a street event on Kankaimon Street at 5 p.m., followed by evening activities beginning at 7 p.m., and fireworks at 9 p.m. The afternoon parade is well worth watching — and photographing — as the “Horizontal Picture Scroll of King Satto Parade” depicts King Satto’s early history, handed down on Hagoromo Legend and the dance festival.
Organized by a group of residents’ associations and the arcade street association, and co-sponsored by the Ginowan City, Ginowan City Tourism Promotion Association and the Ginowan City Chamber of Commerce, the Hagoromo Festival is one of the city’s largest and most popular events of the year. 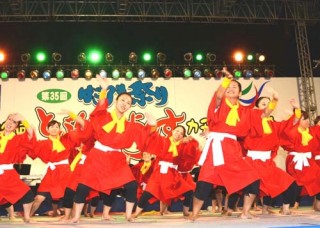 Various youth groups perform throughout the Hagoromo Festival propping up the youthful image of Urasoe City.

Kachashi, a joyful Okinawan folk dance, is a key element of the festival. Kachashi is the dance locals perform on happy occasions to the accompaniment of sanshin and small drums. Hagoromo, or Haninsu in the Okinawan dialect, means a celestial robe. During the Hagoromo Festival, a plethora of historical costumes are everywhere. Great opportunities for memorable photographs.

The legend behind Hagoromo keeps growing each year, with variations in mainland Japan and around the world. The gist of it, though, is that a man walking near a river came upon a beautiful robe he’d never seen before, and took it home and placed it in a storage room. Returning to the river, he spotted a beautiful heavenly maiden bathing. As she finished, she found her robe gone, a disturbing discovery.
The man stepped forward, talking to her gently, inviting her to his home. The two later married and had two children, a boy and a girl. As the children were growing up, the maiden heard the older child sing a lullaby to her brother. The song was about the robe kept in storage. Although the woman was living a happy life, she couldn’t resist the temptation of getting it back, found it, put it on, and immediately had to go back to heaven, leaving her husband and children.

The story usually ends on this sad note, but the legend of Hagoromo told in Ginowan City continues, as the son became King Satto, a powerful 14th century lord who contributed to building the Kingdom of the Ryukyus. The name Hagoromo Kachashi was taken from the story, and combined with the energetic dance of Kachashi. For those who missed last week’s big Eisa festival in Naha, the Hagoromo Festival is a chance to catch up and see the Ryukyu Kingdom costumes.

The Saturday afternoon parade traveling the Kankaimon Street route just outside the convention center complex will move into the festival area at the Kankaimon Gate. Hundreds will be participating in the parade, including eisa groups, while still others dress up in traditional clothing. Elsewhere on the festival grounds, expect the usual festival food, souvenir and amusement booths, along with fireworks at the beach starting at 9 p.m. Official festival hours are from mid-afternoon Saturday to 9:15 p.m. Sunday’s hours are from 11 a.m. to 9:15 p.m.
Sunday entertainment is mixed, with action on the main stage beginning at 1 p.m., with Yoshimoto Comedians’ Live. The Hagoromo Eisa Festival cranks up at 2:15 p.m. getting everyone in the right spirit for the 24th Hagoromo Kachashi Contest starting at 4:50 p.m. Fireworks cap the Sunday festival entertainment with a 20-minute barrage of pyrotechnics lighting up the skies over the Convention Center site, celebrating the 51st  anniversary of Ginowan City Municipal Organizations running the Hagoromo Fireworks Festival.

As with all festivals, entry is free. Spending is whatever you want it to be, driven by thirst and hunger, coupled with individual abilities to resist purchasing souvenirs at the countless stands ringing the festival site.