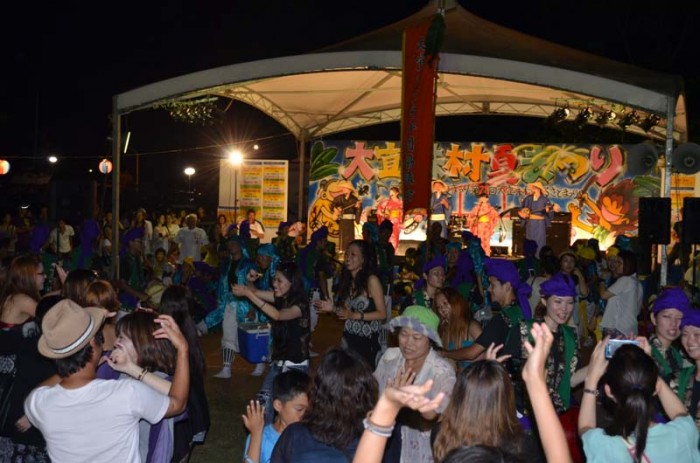 Ogimi Village welcomes everyone to have a good time at their weekend festival.

Ogimi Village is readying its weekend Summer Festival, lining up entertainment that ranges from hula dance to kids’ programs to even a goat-scramble tug-of-war. 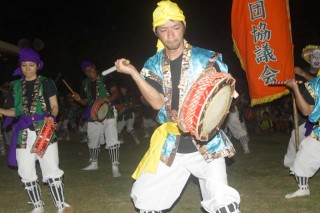 Several youth eisa groups show their skills during the two days of Ogimi Festival this Saturday and Sunday.

The Saturday and Sunday Ogimi Village Summer Festival at Shioya Fishing Port is free, running 5 p.m. ~ 9 p.m. on Saturday, and 2 p.m. ~ 9 p.m. on Sunday.  Parking is available at the Yui no Hama Yui Beach reclaimed area near the fishing port.  Organizers say the festival will be postponed in the event of heavy rain or stormy weather.

This festival is always on the 2nd Saturday and Sunday of August, bringing out unique programs, such as a dance show by local nursery school children, entertainment exhibitions by local seniors and the local ladies’ society, the haarii races, and a goat scramble tug-of-war. The Eisa show by the young men’s association of Ogimi village, and launching about 1,200 fireworks, are the highlight of this festival. 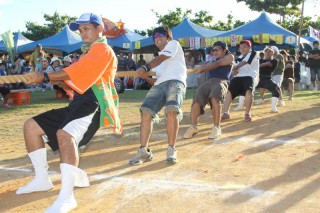 A tug-of-war is also a part of the festival.

The Ogimi Village Summer Festival is a typical Japanese local summer festival in which everyone is welcomed. Since many stalls will be open for making this festival more pleasant, it is suitable for participating by families, sweethearts and friends.

Everything gets under way with opening ceremonies at 5 p.m. Saturday, followed by the local nursery school, a karaoke contest, the local women’s club on stage, and the Miyagi Sisters performing.  Evening entertainment includes the youth club, Ms / Mr stage and Trickster Goonies live.

The fun begins Sunday with the tug-of-war elimination round at 2 p.m., followed at 4 p.m. by the high school students band, Japanese drums on stage, and seniors.  The tug-of-war finals are at 5 pm.  The Yako Hula Girls perform on stage at 6 p.m., followed by Jazzholic and Aimoco.  The 1,200-pyrotechnics fireworks exhibition begins about 8:15 p.m., followed by the Youth Eisa Show.