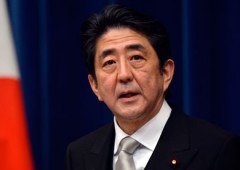 Japan PM Shinzo Abe seems to be leaning towards keeping the original schedule of the national sales tax increase.

Prime Minister Shinzo Abe appears determined now to press ahead with plans to raise Japan’s sales tax as scheduled, in hopes of making crucial repairs to the nation’s finances.

Abe seems convinced the new tax must be implemented, despite calls from some in his government to tone down the increase. He’s called the move a “difficult decision” between trying to rein in his country’s heavy public debt, against allowing financial growth in Japan, the world’s third-largest economy.  Abe is still working with his operatives to evaluate alternatives to the sales tax plans, perhaps to implement increases more gradually.

As it stands now, Abe will give the green light to raising to 8% the sales tax next April, up from the current 5%.  In October 2015, the sales tax will jump again to 10%.  “I’m confident Prime Minister Abe is not wavering on the tax-hike plan,” says Tetsuo Saito, head of the junior coalition partner New Komeito’s tax commission.  Takeshi Noda, the Liberal Democratic Party’s tax chief, says he’s already met with Abe about the tax increase, and “of course” he intends to move forward with it.

Concerns about the fragile state of the economy had Prime Minister Abe considering delays to the tax hikes, or seeking alternatives, but none materialized.  Noda and Saito say if Abe had decided to withhold the tax hike, it could derail improvements in the Japanese economy, where public debt tops 240% of the Gross Domestic Product.  Changes could have jacked up long-term interest rates.

“Confidence in Japan would fall, and government bond yields would be affected” if Tokyo gives the impression that it is faltering on the tax issue, said Noda, a former finance ministry bureaucrat and a fiscal hawk. “That could be fatal,” he said. “The biggest risk to ‘Abenomics’ is a spike in interest rates.”

When Abe staged his return to power last December, he was promising to improve the world’s third-largest economy by mixing fiscal and monetary stimulus together with other promises of actions that would stage long-term growth reforms. Although Japan’s economy is questionable, and the debt mounting, the country still enjoys confidence by investors.