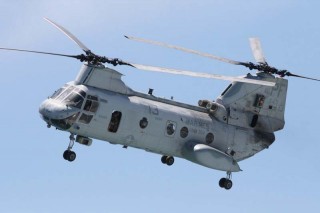 Sea Knights will make their final flights on Okinawa, Monday.

The last of the U.S. Marines’ stalwart CH-46E helicopters, a medium lift, tandem-rotor transport machine in use for decades, go into retirement on Monday, making the short hop from Futenma Marine Corps Air Station to Camp Kinser.

There, the Boeing helicopters belonging to Marine Medium Tiltrotor Squadron 262 will await final disposition, replaced on a one-for-one basis by the MV-22 Osprey.  The first models of the CH-46 were introduced in 1964, and have served as all-weather, day-or-night assault transport helicopters for combat troops, supplies and equipment. Additional tasks include combat support, search and rescue (SAR), support for forward refueling and rearming points, CASEVAC and Tactical Recovery of Aircraft and Personnel (TRAP).  The Navy phased out its Sea Knight helicopters in the early 2000’s in favor of the MH-60S Knighthawks.

A total of 524 Sea Knight helicopters were produced by Boeing Vertol, the last ones coming off the assembly line in 1971.  The Marines are the last U.S. military service to use the $6 million per copy Sea Knights.

The MV-22 Ospreys which replace the Sea Knights can fly twice as fast, carry triple the weight and fly four times the distance as a CH-46E.

Basing the Osprey in Okinawa significantly strengthens the United States’ ability to provide for the defense of Japan, perform humanitarian assistance and disaster relief operations and fulfill other alliance roles. We are committed to forward deploying our strongest capabilities in the defense of our Japanese allies.