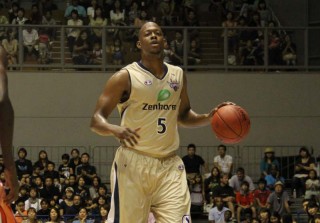 Fans look forward forAnthony McHenry to deliver the goods against Goyang Orions in the next week’s pair of matches on Wed. & Thu.

Off to a rolling start with victories over the Iwate Big Bulls, the high-flying Ryukyu Golden Kings are working hard this week, preparing for a pair of contests next Wed. and Thu. week against one of Korea’s top ranked professional teams.

The Goyang Orions of the Korean Pro Basketball League take on the Golden Kings next Wednesday and Thursday at the Budokan in Onoyama Park in Naha City. The Goyang Orions is one of the strongest teams in the KBL, reaching the playoffs last season.  The squad’s already in Okinawa to train and prepare for the Golden Kings, after arriving over the weekend.

Guard Chon Tae Poong and forwards Leon Williams and Choi Jin-soo are three players most highly heralded on the Orions team.  Chon Tae Poong came to Okinawa before as a member of Jeonju KCC four years ago, but plays now with the Goyang Orions. He has an American father and Korean mother.  He’s also a fellow student of McHenry at the Georgia Institute of Technology.

Korean basketball is ranked high on the scale of Asian basketball organizations, with the Orions atop the list of highly competitive teams.  This year’s Korean natiponal team is described as strong and aggressive, and one that plays a rough physical style. They won the 3rd place in the preliminary matches in Asia and earned the right to be a participant in the FIBA Basketball World Cup matches, which are scheduled for 2014.

The next matche for the Kings is their first home game of the Basketball Japan League season against Tokyo Cinq Reves, a team that joined the league two years ago. Tokyo Cinq Reves ended the last season in 8th place in the Western Conference. For the Kings, it is the first home game of the season in 2013-2014, and important for Okinawa, which hopes it can regain the championship this season. That’s a goal that escaped the team so frustratingly at the end of the last season.