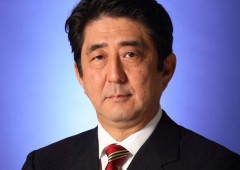 Japan’s Prime Minister is hinting he’s planning to take another look at what to do with the feasibility of hiking the consumption tax to 10% starting in October 2015.

The Liberal Democratic Party, Shinzo Abe’s party, would like to see the changes because they believe it would spur additional growth under Abenomics.  Abe says he’s not sure whether to stay on track with plans to increase the tax to 8% beginning next April, but says he’ll try to make the decision by October 1st.

“If we raise the tax to 8%”, says Abe, “we need to make a decision by looking at the consequences.  Whether risks in the global economy will become evident is an important factor to be watched.”  Abe’s ruling coalition could make the tax change more palatable by relaxing the rules for a temporary cooperative tax cut program designed to motivate companies to increase wages, even as the Prime Minister is tackling 2% inflation.

The corporate tax cut program began six months ago as a three-year program to allow firms that raise wages by 5% or more staring in fiscal 2012 to deduct 10% of wage growth from their taxes. The program is intended to end in 2015, but could be extended through fiscal year 2017.  If that were to happen, the wage growth requirements would return to 5% in the two out-years, 2016 and 2017.