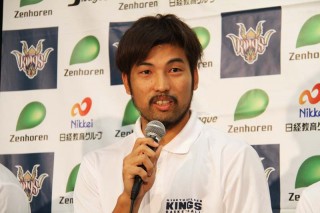 Shigeyuki Kinjo takes the helm as the team captain after two and half year absence from the court because of an injury.

The Ryukyu Golden Kings are fired up, preparing for a new Basketball Japan League season with a new coach, a skilled team of veterans returning, and a pledge to bounce back from a discouraging ending to the best year ever, only to fizzle in the semi-finals and give up everything.

Okinawa was flying high last spring, sporting a 42-10 record, the league’s best, as they headed into the home court semi-finals that turned the season upside down. The Kyoto Hannaryz ousted Okinawa in a mini-tiebreaker and the Golden Kings got an earlier-than-planned start on organizing the 2013-14 campaign.

First, the new coach. Dai Oketani, who’d led the Golden Kings to a BJL championship trophy, was replaced by Koto Tohyama last year, and despite the superb winning record, he was replaced only days after Okinawa’s ouster from the race for the league title.

This year, a hometown boy is the Golden Kings head coach, and he’s excited about the season.  Tsutomu Isa, a 44-year-old Ginowan native, is now in charge of a squad that has a mix of newcomers and veterans.  Isa has been on the hardwoods sidelines for six seasons, working under Hernando Planells Jr., Oketani and Tohyama.  Now he’s got the reins of the squad that sees Shigeyuki Kinjo, a six-year veteran with the Kings, as team captain.

Anthony McHenry, Jeff Newton, Morihisa Yamauchi and Naoto Kosuge are all back, welcoming four newcomers to the lineup.  The motto of the Kings for the season 2013-2014 is “The power of team work!” and the goal for the team is to recapture the championship with stronger than ever team work. Of course, it’s not known yet what the level of skills and power the Kings this season can show, but that make the pre-season games all the more interesting.

This is a good opportunity to look and feel how the Kings stand up this season as they face Iwate Big Bulls this weekend at Ginowan City Gym. The head coach of the Big Bulls is Dai Oketani, who led the Kings to the bj-League championship twice before, and then there is the former captain of the Kings, Tsubasa Yonamine, who worked great under Oketani’s control. They know Kings very well, and should be a good match for the Kings. This is just the third season in the league for Iwate, but the experienced head coach who led the Golden Kings to championships twice will help the team immensely, and those two are sure to try to beat Kings with all in their power.

Of course, the Kings will also play their best and need some rousing support and cheering from their fans.  Kinjo has been chosen Team Captain by fellow team members for this season. He spent a long two and half years off court because of an injury, but assures the team’s management he’s in top shape this season. He is emotionally, physically and mentally up to the mark.

Coming to town for the weekend are the Iwate Big Bulls, with Oketani and former Kings player Yonamine.  Yonamine transferred to Iwate Big Bulls from the Golden Kings for this season. Yonamine spent much time on the bench in last season’s games while with the Kings, but then decided to link his fate as a player with another team. He’s intent on playing very well for his new squad, and maybe even make Kings regret letting him move! His great eye for play as a captain of the Kings should help change Iwate Big Bulls for the better. Let’s check it out!

Looking ahead, after Iwate comes a challenge from Korea. The Kings’ next pre-season match is against the Goyang Orions of the Korean Pro Basketball League (KBL). Goyang Orions is one of the strongest teams in the KBL, reaching the playoffs last season. Guard Chon Tae Poong, and forwards Leon Williams and Choi Jin-soo, are three players of the team to watch out. The team is very strong and plays in very physical style. The level of Korean Basketball is high compared to the rest of Asia. Goyang Orions will stay in Okinawa for 10 days for training, and the Ryukyu Golden Kings look forward to playing against such a strong team. Thats promises to be a fun and remarkable match.