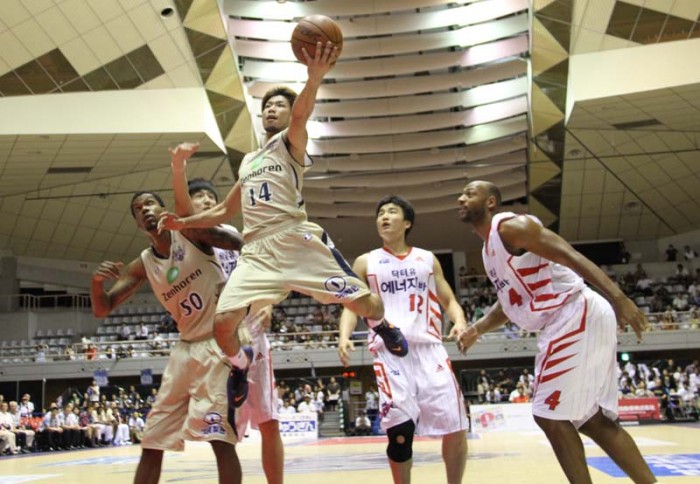 Ryuichi Kishimoto (#14) set the table for Golden Kings’ win in the second match against Goyang Orions of Korea.

Okinawa again proved an inhospitable place for the visiting Goyang Orions, going up against the Ryukyu Golden Kings in a weekday pair of games that found them on the losing side of the scoreboard in both. 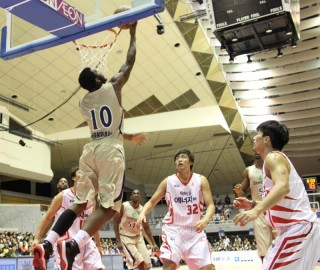 Scootie Randall (#10) sinks one for Kings on Thursday.

A ten-day training regimen for the Korean squad proved of no consequence as Okinawa hammered Goyang 86-69 in the first match, then fell again, 77-73, on the second try.  The games were the first ever played by the Golden Kings at Okinawa Budokan, and the weeknight match-ups saw many spectators arriving still sporting their work Kariyushi shirts.  The Golden Kings victories put the squad at 3-0 in their pre-season games as the league schedule prepares to get under way.

Okinawa was slow to start in the Wednesday contest, falling behind of Goyang. Late in the first half the Golden Kings scrambled for rebounds and steals, hanging on for a halftime lead of 37-36.  The second half was all different, with Okinawa jumping to a 16-4 advantage, while applying defense and an aggressive offense, pulling away to the 86-69 win.

Thursday’s game saw Goyang’s Chon Tae-poong, wearing the #3 on his jersey, spurring his squad in a hard-fought offensive game.  For some, it almost seemed like a revenge match.  Okinawa’s #14, Ryuichi Kishimoto, turned the tables and put the spotlight on himself, earning the supernova title for his fast-paced action.  While Goyang had the height advantage over the Golden Kings, Okinawa proved more accurate with the passes, as well as perfect timing on four three-point shots at critical times to lead 28-15 at the half.

Stubborn, Goyang refused to slack off, pressing the advantage in the seesaw game throughout the second half.  It wasn’t enough though, as Okinawa kept the edge for the 77-73 win.

The 2013-14 Basketball Japan League officially kicks off the season beginning this weekend.