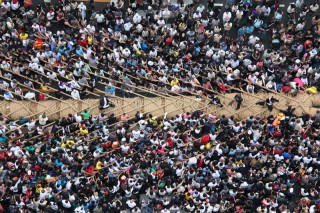 The east team won the Naha Giant Tug-of-War this year by managing to pull the 43-ton rope two meters to their direction in 30 minutes.

The Hwy 58 was closed for the event, and according to organizer Okinawa Giant Tug Of War Preservation Association, 27,700 people grabbed a rope to join pulling the 200-meter-long, 43-ton rope, certifiable the biggest of its kind in the world.

This year, the east team won the west by two meters making it a total of 13 wins, 13 loses and 14 ties since the event was restored in 1971.

The tugging stated in earnest at 4 p.m. and within 10 min. into the contest, the east team was already leading, and kept its lead until the 30-minute limit.