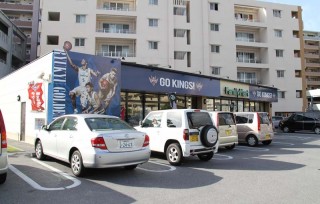 A FamilyMart store in Omoromachi, Naha, is dedidated to the Ryukyu Gilden Kings.

Okinawa FamilyMart has transformed one of their shops in Omoromachi, Naha, into an Okinawa basketball team Ryukyu Golden Kings paradise.

The store opened on Sep. 24, and with its new look it became the first special theme FamilyMart in Okinawa. All Kings’ team members attended the opening ceremony, and signed their names on a large panel. Team representative Tatsuro Kimura greeted the attendees of the ceremony, saying, “It is a pleasure to have a place where you can feel the team 24 hours everyday. We hope many people come.”

Okinawa FamilyMart president Kenichi Oshiro said “We would like to join hands with the citizens, and bring them excitement of the team who has given us so much courage and emotion.”

The team goods are scheduled to be on sale in the shop starting Oct. 10th.