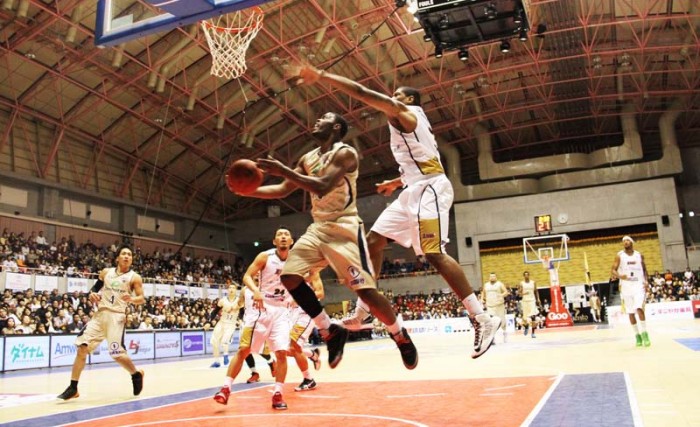 Scootie Randall prepares to score one more for the Kings in Sunday’s game that the Golden Kings won 74-74.

Okinawa’s professional basketball squad is currently third in the Basketball Japan League’s Western Division, but with play like they demonstrated against visiting Rizing Fukuoka, they’re working to regain the top spot they’re accustomed to be in.

The Ryukyu Golden Kings advanced towards that goal at the Okinawa City Gym, sweeping a pair of victories from the Rizing Fukuoka, 61-58 in Saturday’s contest, and kicking out a ten-point win on Sunday, 74-64.  The two wins push the Golden Kings to a 6-2 record as they seek to keep their play in front of the home fans on a winning note. 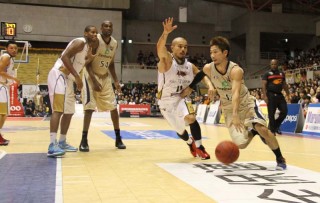 The Golden Kings struggled early in Saturday’s game, but jumped into the lead in the second quarter behind the play of Scootie Randall’s shooting and Kibwe Trim’s play under the basket.  The second half margin remained about the same as Fukuoka pressed hard on defense, keeping the Kings’ scoring plan off balance. Fukuoka tied the game once, before Okinawa came on strong in the final minutes.

“We played a good game in the first half,” says head coach Tsutomu Isa, “and then Fukuoka caught up.  It was the loud cheering by our fans that gave great strength to the team, and the win.”  Fukuoka coach Kimitoshi Sano lamented the game’s being played at Okinawa’s pace.

Sunday was more to Okinawa’s liking, maintaining control throughout the game.  Golden Kings coach Tsutomu Isa reassured the players they needed to “have their full energy up front,” which they did, leading him to smile about being “happy to have a winning streak on our home court.”  Rizing coach Sano said his team looked good at time, “where Fukuoka was able to show their colors, but in the end the Kings took over at their pace.”

The two squads entered the weekend with mediocre records, the Golden Kings 4-2 and Rizing 3-3.  With the pair of wins, Okinawa expects to move up in the standings, looking forward to Nov 2nd and 3rd games at the Naha City Gymnasium against the Kyoto Hannaryz.