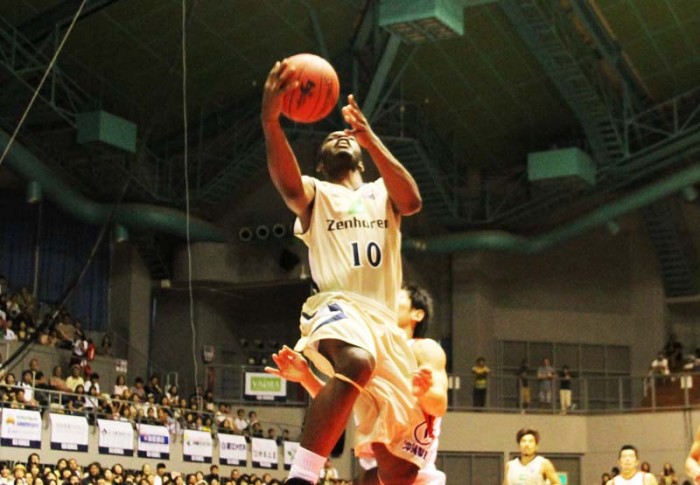 Golden Kings Scootie Randal added 21 points to Kings, Sunday, but even that was not enough to stop Shiga from winning the game.

Okinawa’s professional basketball squad didn’t find Shiga Prefecture all that friendly an environment over the weekend, battling from behind to win the first game of their series against the Lakestars, only to struggle and fall in the Sunday afternoon contest.

The Golden Kings trailed Shiga in a pair of contests played in Yasu City Gymnasium until the third quarter, when they found some momentum behind the long ball shooting of Shigeyuki Kinjo to pull off a 13-point win, 83-70.  Teammates Anthony McHenry, Kibwe Trim and Scootie Randall provided momentum in the closing quarter to propel Okinawa to its 5th victory.

Trim poured in 9 of 10 shots from the field, while reigning league Most Valuable Player McHenry added nine rebounds, five assists, four steals and a pair of blocks for the Western Conference powerhouse.  Scootie Randall added 17 points in the win, which had seen Shiga leading 38-36 at the half.  Tsutomu Isa, Okinawa’s head coach, praised Shiga for “a lot of talented players in the inner field,” but said he thought “our defense was able to keep them down.” Chris Boettcher, Shiga’s Head Coach, termed his squad’s first half “great”, but then pointed out “our offense has to try not to stay in a single player mood but to play as a group.”

Okinawa found out Sunday how true Boettcher’s thinking was, battling hard on defense but unable to get shots to go through the hoop in the first half.  Naoto Kosuge did his part in the second quarter, pouring in three-pointers, but they weren’t enough to give momentum to the Golden Kings. Okinawa trailed 41-36 at the half.  Okinawa coach Isa said “Shiga was 100% in the game and we got intimidated by their spirit.  The Golden Kings never found the range, falling 79-71.

The Ryukyu squad is now 4-2 on the season, despite Temple University’s Scootie Randall parking 21 points through the basket, while Naoto Kosuge dumped in six three-pointers and Anthony McHenry added 11 points and nine rebounds.  Okinawa Center Jeff Newton played only 4:12 in the contest, scoring two points.  Coach Isa had been holding Newton back because of knee pain

Okinawa returns to the friendly climate of the Okinawa City Gymnasium this weekend, where they take on Rizing Fukuoka.  The squad is currently sitting in third place in Western Conference standings.