Despite of the best try of the Golden Kings, things did not go the way they wanted and the team lost 74-67 on overtime. Shigeyuki Kinjo (#6) and Jeff Newton (#50) creating action at Cinq Rêves end of the court.

The undefeated Ryukyu Golden Kings were waiting as the Tokyo Cinq Rêves came to town last weekend, only to wish they hadn’t as the visitors pushed and pounded Okinawa through an overtime period to eke out a victory. 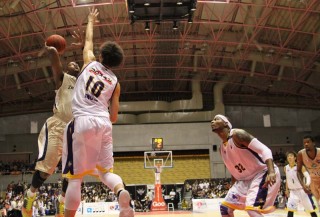 To his own surprise, McHenry was not on the top of his game on Saturday, but more than made up on Sunday racking up 26 points and hauling in a dozen rebounds.

Tokyo pulled off the 74-67 win behind the pressure of its best shooter, Yuji Ide, who kept pressure on Okinawa to the point regulation time ended in a 61-61 deadlock.  Tokyo coach Motofumi Aoki praised Ide’s play, noting “Up until now Woods was our leading player, but I was stunned to see Ide leading the team to victory.”  Tsutomu Isa, the Golden Kings’ head coach, was happy with the fans, noting “It’s tough to say why we were defeated,” promising “tomorrow we’ll show a more positive offense and defense.”

That’s exactly what the Golden Kings did, roaring back Sunday afternoon at the Okinawa City Gymnasium to rip off a 95-72 win.  Anthony McHenry and Scootie Randall were aggressive on defense while Kibwe Trim showed the ultimate presence under the basketball.  Ryuichi Kishimoto and Naoto Kosuge gave the team a power presence playing the outer court, allowing dominance at halftime, 51-35.

Tokyo rattled the Golden Kings midway through the contest, before Masaya Karimata brought the team back to steadiness to push ahead with the win.  Kings coach Isa praised the team, noting “I wanted to give the team members a plan to fulfill, and timing went well.  Players were able to set the offense and defense without falling behind.”

Anthony McHenry was happy with Sunday, having racked up 26 points while hauling in a dozen rebounds.  “Today we made a great win,” he said, although he added he doesn’t understand why his play wasn’t up to par on Saturday.  McHenry praised fellow teammates for picking up on his energy levels, allowing them to put pressure on Tokyo.  Kibwe Trim says he understood his part by taking care of the rebounds, while Masaya Karimata was pivotal in team play, incorporating nearly every player on the squad on every masterful pass.

Coach Isa says he was “Relieved to have won this game surrounded by all the fans,” noting he was glad players “stuck to our game plan.”  Tokyo’s coach Aoki was disappointed by the loss, but said “playing in Okinawa and its excellent atmosphere was great experience for our team.”

The 3-1 Golden Kings are on the road this weekend, facing the Shiga Lakestars at Shiga Prefecture’s Yasu City Gymnasium on Saturday and Sunday.