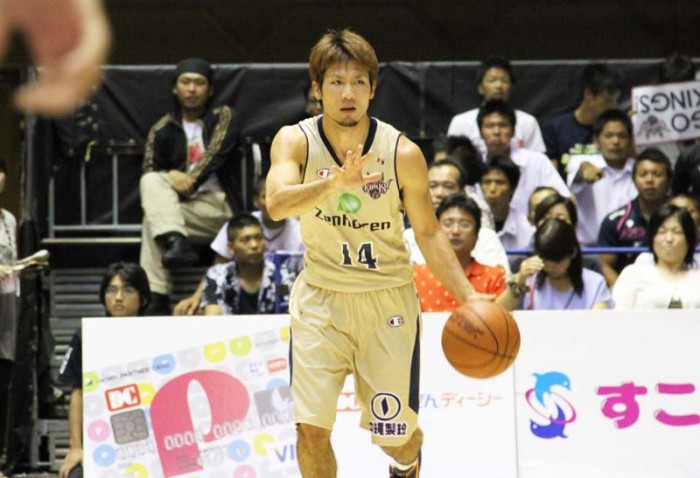 Ryuichi Kishimoto proved to be the team’s play-maker, and was instrumental in victories on both days.

The Ryukyu Golden Kings opened the new Basketball Japan League campaign much as it ended last year’s, whipping out a pair of victories on the road.

Okinawa nailed the Oita HeatDevils 91-56 on Saturday in front of 1,008 spectators, then returned Sunday to do it again, 77-73.  Coupled with pre-season victories, the Golden Kings are undefeated on the young season.  The Golden Kings, who lost in last year’s championship series, are ranked No. 1 in the Western Conference.

The team’s new play-maker, Ryuichi Kishimoto, connected with Shigeyuki Kinjo and Scootie Randall to jump to a quick start Saturday, 35-23.  With further assistance from Anthony McHenry and alley-oops from Kibwe Trim, the team surged ahead in the fourth quarter, with Yoshihiki Yamashiro demonstrating reliability under the basket, making a total of 16 shots.

Oita’s head coach, Yukinori Suzuki, paid tribute to Okinawa’s play, noting “It was a tough game not only on the score board, but also because the team was not able to pursue the offense or defense in mind. I am very grateful we were able to play in the season-opening game, but it was a disgrace. But it’s just the beginning, the only thing we have left is to proceed forward as team.”

Tsutomu Isa, longtime assistant coach and now head coach was glad that first game was over.  “I am very happy to win this first valuable pair of games of the season. Last year we were not able to win the championship, so “victory” is something we don’t want to share. It was a terrific game, just as planned.”

On the 2nd and 3rd quarter, Oita fought back furiously and although they turned the score around for a moment, the 4th quarter began with a one-point lead for the Kings. In the end the Kings were able to shake off Oita with a three-point shoot from Ryuichi Kishimoto bringing the team to victory.

Ryukyu held a 46-29 edge in rebounds, while Oita made 20 of 25 free throws. Indiana University alumni Verdell Jones III was 11-for-13 from inside the 3-point arc for Oita and scored 29 points overall. He added nine rebounds, five assists and four steals. Teammates Gabe McCulley and Devonne Giles scored 16 and 10 points, respectively. Veteran guard Taishiro Shimizu, who has played in the league since its inception in 2005, had nine points and seven assists.

Tsumomu Isa was cautiously optimistic: “Last night, although we had the lead by a large margin, we turned it to a cross game making careless misses, and not being able to cover holes. It was a great experience to win in such circumstances. Luckily we were able to experience this in the first game and will be more careful in the future games of the season.”

Yukinori Suzuki was dismayed but philosophic about the second loss: “Last night we might have been defeated, but I want to thank the team for the 100% they put in the game. To win the next game, all we have to do is practice, practice and practice.”

Next week will be the season’s first home game for the Kings when the team faces the Tokyo Cinq Rêves on Oct. 12 and 13 at the Okinawa City Gymnasium.