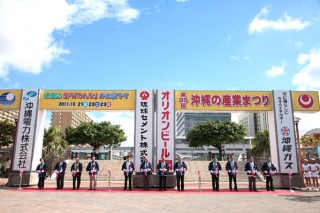 The annual Okinawa Industry Festival opens its gates on Saturday for a two-day run in Onoyama Sports Park in Naha.

“Okinawa products that glue us together” is the theme for this year’s Okinawa Industrial Festival, long billed as a real-world products festival with an appeal to everyday citizens. The annual fair was shortened to two days from the planned three, as the expected high winds on Saturday put the outdoor exhibitors and vending tents in jeopardy.

The exhibit is an opportunity for Okinawa producers to enlighten consumers about what’s on the market, while at the same time learning from citizens how to make their products better.  As the largest industrial festival on the island, organizers tout the fact it’s the single-stop place for experiencing all types of industries in one place. 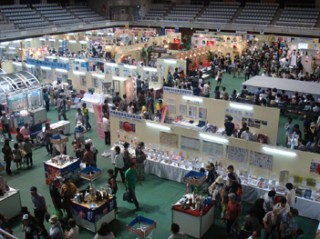 ashion and textiles are in-doors in Budokan Hall.

The 37th  Annual Okinawa Industrial Festival runs Saturday and Sunday in downtown Naha, at the city’s omnibus Onoyama Park complex.  Within the sprawling park, nearly 500 firms and organizations will stage exhibits at the martial arts Okinawa Prefecture Budokan, around the fountain, along the river, nearby the various athletic venues, and along winding paths.  A total of 2,800+ products will be exhibited.

Organizers say they’re expecting well over 100,000 visitors across the two-day exhibition, even through the event was shotened by one day because of passing 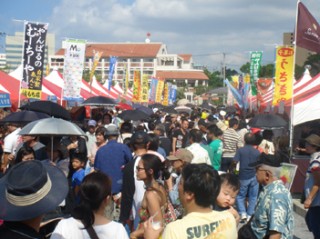 Plenty of food and drink stalls line the paths at the fair.

typhoon Francisco.  Okinawa developed and produced products will be highlighted.  Okinawa products are gaining influence outside the prefecture, officials say, and they want to further promote the island goods across more of Asia.

The first Okinawa Industrial Festival took place in 1977 to stimulate the economy after the recession, after the Okinawa International Ocean Expo. All Okinawan industry, including agriculture, manufacturing industry, and service businesses are joining the festival and introducing Okinawan local items to everyone. 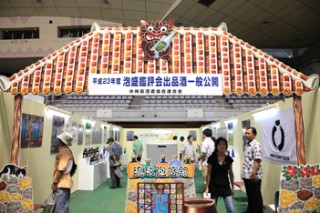 Awamori distillers are concentrated in their own corner.

This year’s festival again brings together Okinawan cooperation among industry, government and the academic communities and universities.  Okinawa tourism organizations will be actively pitching and promotion business commerce, and there will also be an organization exhibition by middle and small business enterprises.

During the festival, an award ceremony for “select Okinawan Local products” will honor the best of what Okinawa has to offer.  When a new item is selected, it gets a chance to be recognized. For the exhibitors, the event is an opportunity to show their special products, and to get immediate feedback from visitors. Visitors can test the new items, then share their reactions to products.

Organizers say “when we hear that new products were sold and we received visitor’s feedback from vendors, that pleases us. We’d like exhibitors to join the festival as a place to come out with their new products.” The festival runs 10 a.m. ~ 8 p.m. each of the three days.

A dozen major venues are being established again this year, wrapping around a lucky 100 booths with food, beer and other beverages.  Okinawan Awamori will have its own exhibition area, and will stage awamori tastings.  Visitors can expect foods, plants, juices, and more at the Agriculture and Fishery Production area.  There will be venues dedicated to recycling, and products derived for sale as a result of recycling, plus housing and special displays from 49 different cities, towns and villages within the prefecture..

The exhibition is open to everyone on Okinawa.  Admission is free to all venues.  Food and beverages cost, as well as souvenirs, foods and other goods purchased from vendors and artists on display.

Onoyama Park is located on the south side of downtown Naha, across from Naha Port and Naha Military Port.  Travel south on Highway 58 from the military bases.  As you approach the river, Onoyama Park is on the left.  But be warned: Parking around the area is almost non-existent, and organizers strongly urge visitors to use Okinawa Monorail and other means of public transportation.