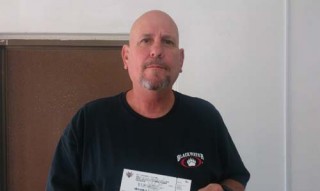 Pat Albritton is the lucky winner in this week’s Japan Update raffle. He won a pair of tickets to a Ryukyu Golden Kings basketball game, and plans to attend the team’s next home game when the Kings faces Bambitious Nara at Okinawa City Gym, Dec. 7 and 8.

Pat is from San Antonio Texas, but has called Okinawa home for eleven years. He’s planning to retire on the island, so he’s pretty much decided to settle here for the rest of his life. As a reason, he cites the island’s “peaceful and stress free” environment that he says suits his tastes well.

He’s also taken to liking local food, of which he says “There are too many favorites to list, but goya is definitely at the top of the list.”

He says he finds its easy to live here. “People are very friendly in general, and the lifestyle is kind of laid back, which I like,” he states.

But despite having fallen in love with Okinawa, he still would like to go sightseeing to the rest of Japan with Hokkaido being on top his list of places to visit.