Golden Kings again on a roll 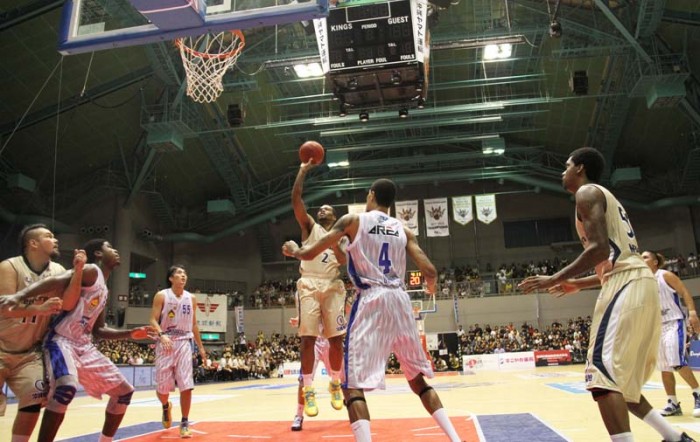 Draelon Burns is about to score his first points as a Golden King.

The home fans couldn’t have been happier, watching their high-flying Ryukyu Golden Kings make winning look easier as they swept a pair from the visiting Shimane Susanoo Magic. 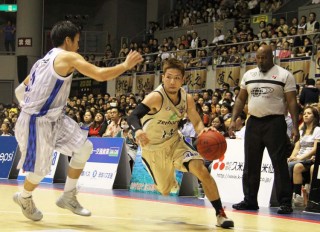 Ryuichi Kishimoto was awarded the MVP of the League title for the games he played on the first weekend of November after scoring 18 points and 5 assists on Nov. 2 game against Kyoto followed by 17 points on the following day, including his sinking all of his seven free throws.

Playing at the Ginowan City Gymnasium, the Golden Kings racked up their fifth and sixth straight victories of the young season, beginning with an 85-69 win on Saturday.  Naoto Kosuge and Masaya Karimata were on fire from three-point range, while the team’s newest member, Draelon Burns, skillfully assisting from all over the court.  Kibwe Trim did his magic too, working beneath the baskets.

“I’m happy with the wins, and keeping the streak going,” said head coach Tsutomu Isa.  “There are still many places we need to make fixes, making corrections as we go, and hustling throughout the game.”  Visiting coach Vlaikidis Vlasios was philosophical about the loss, noting “Okinawa unfolded a great game, and although we gave it all to catch up, the effort wasn’t enough.”

Sunday was also not enough for the Susanoo Magic, falling 60-48 as the Golden Kings, currently in first place in the Basketball Japan League’s Western Conference, poured on the heat.  “It was a tough game,” head coach Isa noted, pointing out that “thanks to the 2,400 seconds of patience by our defense, I’m proud we won the game.”  The Susanoo Magic coach, Vlaikidis Vlasios, was filled with praise for the Golden Kings, explaining he’d called for adjustments after the first loss, “but it was impossible to take over Okinawa’s pace.”

The Golden Kings take to the road this week, venturing into the Toyohashi Gymnasium Saturday and Sunday to face the Hamamatsu Higashimikawa Phoenix.