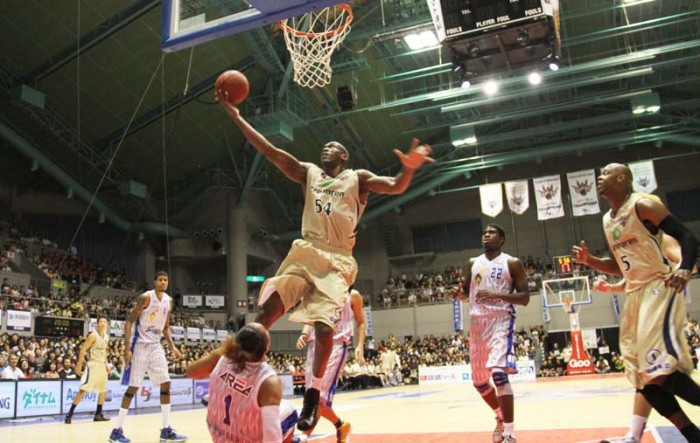 Kibwe Trim, together with team mate Jeff Newton, were the two players that got King’s engine running, Saturday.

The Ryukyu Golden Kings know how to generate excitement, whether on the road or in front of the home fans, and they have done it again with a pair of victories over the Hamamatsu Higashimikawa Phoenix.

Okinawa rolled to a sweep over the Phoenix in front of their home fans at Toyohashi gymnasium in Aichi Prefecture, ripping off an 85-69 win in the first game, and 77-64 on Sunday.  The wins were the Kings’ seventh and eighth consecutive victories, which keep them in solid standing atop the Basketball Japan League’s Western Conference. 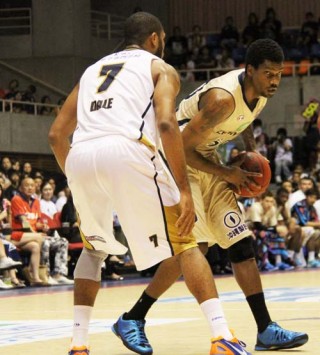 Despite the lopsided score Saturday, it was nip-and-tuck at the start, before Jeff Newton and Kibwe Trim began attacking inside and under the basket to grab a four-point lead.  Phoenix coach Tomoya Higashino says “the fault was all on our team.  They were just not agreeing with each other.”

Although he’d predicted “a whole new different game tomorrow”, it didn’t happen.  Golden Kings coach Tsutomu Isa, who’d gone into the game cautious, said “Hamamatsu had won five games in a row and I imagined it wouldn’t be an easy game, but we won with a big lead. It took some time to tune our pace.”

Sunday was Okinawa’s 14th game of the season, and it wound up being another handy win.  “I’m happy,” said coach Isa, “but this game highlighted some problems.  In the fourth quarter we were far behind, and if we continue like this, we will not be able to win the championship.”  Hamamatsu coach Higashino conceded that Sunday’s game “was a complete defeat, but also a good opportunity to learn.”  The Phoenix bench boss said his squad “doesn’t have the force to beat Okinawa, and our team is still young.”

The Golden Kings are off this weekend, returning to home turf Dec. 7th and 8th for a series against expansion team Bambitious Nara at the Okinawa City Gymnasium.