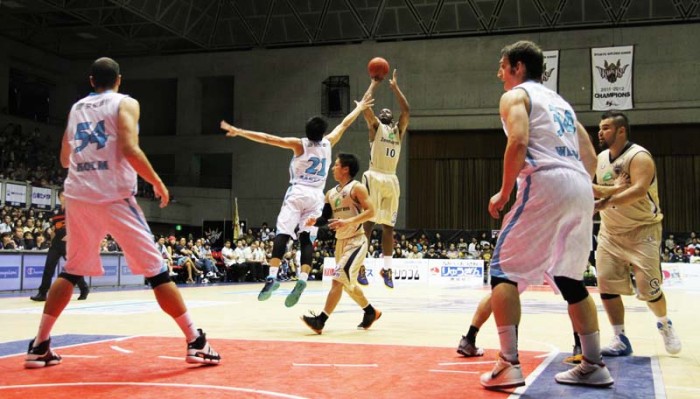 Scootie Randal shooting a 3-pointer on the way to compile his 25-point total in Saturday’s game that the Kings won 93-86.

The Ryukyu Golden Kings climbed to the top of the Western Conference standings in front of its home fans this past weekend, ousting the visiting Kyoto Hannaryz in a pair of contests. 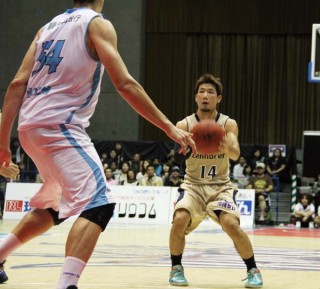 Okinawa made it four-in-a-row on the young season with a 93-86 win on Saturday, followed by a 77-66 victory.  The Golden Kings are now 8-2 this year.  The team lurched from third place to second with Saturday’s win, and then catapulted into first with the Sunday score.

The wins were particularly sweet, because it was Kyoto that kicked Okinawa from last year’s playoffs.  Shigeyki Kinjo and Ryuichi Kishimoto were on their game with a pair of three-pointers each, Saturday, to jumpstart the Golden Kings night.  Starting the second half tied at 40-40, Scootie Randall’s aggressive actions fired him up for 22 points in the half, and a total of 25 for the entire game.  “With Jeff Newton still recovering from his injury, and with Anthony McHenry and Kibwe Trim’s foul trouble,” says head coach Tsutomu Isa, “we couldn’t perform the way we wanted so, I’m happy we won.”

Isa was even happier with Sunday’s action; it put him in the driver’s seat of a first place team for the first time.  He lauded the team’s play noting, “in the second half, with Kyoto attacking under the hoop, we made our inside defense stronger.  I think that’s what gave us the edge.”

The Golden Kings take the weekend off, going into next action November 16th and 17th at the Ginowan City Gymnasium.