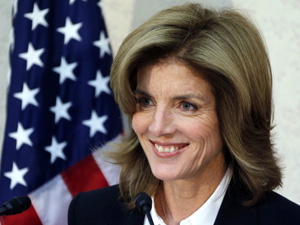 Japan has a new U.S. Ambassador, and one who is close to America’s president, Barack Obama.

Caroline Kennedy arrived to pomp and circumstance in Tokyo, taking a horse-drawn carriage to present her credentials to the emperor at the Imperial Palace.  “I bring greetings from President Obama,” she said upon getting of her airplane at Narita International Airport.  She was accompanied by her husband, Edwin Schlossberg.

She’s the 55-year-old daughter of the late President John F. Kennedy, who was slain in Dallas, Texas 50 years ago tomorrow.  She’s bringing to Tokyo the message she’s in place to take on urgent U.S.-Japan issues.  Analysts say she’s the right person at the right time for the job, noting her close ties to Obama thanks to her role supporting him during his contested presidential primaries in 2008 as he face Hillary Clinton at a time when she was believed the favorite.

A Keio University professor in Tokyo who specializes in diplomacy, Ryuichi Teshima, says “What’s important here is her strong pipeline with Obama and an ability to be able to pick up the phone and speak with Obama directly in the middle of the night for consultation on urgent matters.” Kennedy is the first woman tapped for an ambassadorial post in Japan.

Kennedy spoke of her pride at being in the Foreign Service now. “I am also proud to carry forward my father’s legacy of public service,” she said, noting “He had hoped to be the first U.S. president to visit Japan. So it is a special honor for me to be able to work to strengthen the close ties between our two great countries.”  She’s aware of the not-quite-tight relationship between Obama and Prime Minister Shinzo Abe, and will try to be a buffer between Obama’s liberal views and the right-wing perspectives held by Abe.

U.S.-Japan relations are generally on an even keel, but Obama and Japanese Prime Minister Shinzo Abe are not as close as some would like. “The chemistry is off, possibly because Obama does not support the right-wing views Abe holds,” Teshima said.

The Trans Pacific Partnership is one of the major issues she’ll have to tackle immediately.

Of past American ambassadors to Japan, most –like former Vice President Walter Mondale, and former Senators Mike Mansfield and Howard Baker—were steeped in political popularity.  Others, including President Kennedy’s pick, Edwin Reischauer, was known for his Asia expertise, while others, including the just-departed ambassador, John Roos, is another Obama supporter.