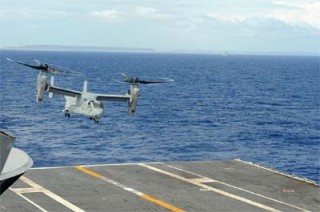 The unique aircraft capable of vertical short takeoff and landing (VSTOL), similar to that of the Marine AV-8B Harrier jump jet, landed on the Nimitz-class aircraft carrier Sunday to refuel before continuing the delivery of relief supplies and transport of personnel in the aftermath of Super Typhoon Haiyan/Yolanda.

“This is the first time in my 10-year career that I have been able to fuel [an Osprey],” said Aviation Boatswain’s Mate (Fuel) 1st Class Joshua Hinck, from Springfield, Mo. “This was a rare event that allowed me to teach my junior Sailors most can only read about.”  According to the aircrew of VMM 265 based in Okinawa, the Osprey can quickly deliver a significant amount of cargo where it is needed.

“The dual rotors, downward exhaust on the Osprey is very different from anything I have worked on before,” said Aviation Boatswain’s Mate (Fueling) Airman Casey Fields, from Glenpool, Okla. “You can already tell its power just from the rotor wash when it is idling.”

Super Typhoon Haiyan reached speeds up to 195 miles per hour, with gusts up to 235 mph and landfall waves of 50 feet. According to the Philippine government’s national disaster risk reduction management council, the super typhoon impacted more than 4.2 million people across 36 provinces in the Philippines.

During Operation Damayan, the George Washington Strike Group is supporting the 3rd Marine Expeditionary Brigade, also based in Okinawa, with assistance to the Philippine government.