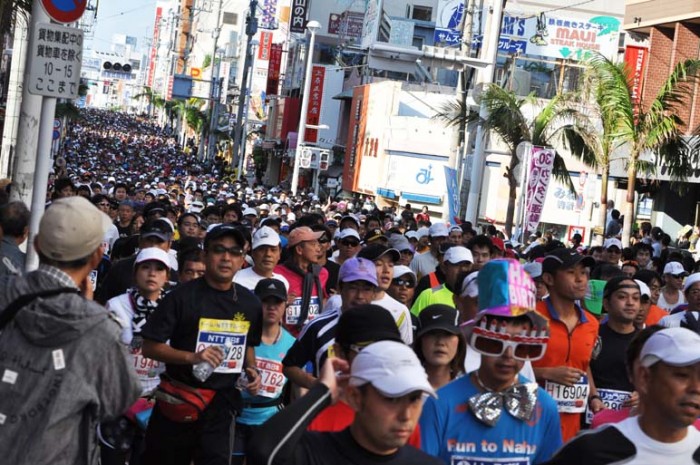 It can be crowded, especially on first stretches, when 25,000 runners hit the course.

It only took one day to fill the quota of 25,000 runners, and organizers say they’re expecting a tremendous race, which begins at 9 a.m. at the Meijibashi crossing with Highway 58 in Naha.  The finale will be Onoyama Park, after runners make the 42.195 kilometer trek across southern Okinawa.

The Naha Marathon began 29 years ago by Naha and Honolulu, who are sister cities.  It marked the 25th anniversary of the relationship. It has since become the island’s premier race event, meandering along a route covering the southern third of the island.  Runners will go through Kohagura, Haebaru, Tomigusuku and Yaese Town on the outbound leg, passing through farmlands en route to Peace Memorial Park, the midway point at 21.3 kilometers.  On the home-bound stretch, the course goes through Nashiro, Itoman City, Onaga and Nakachi.

Spectators have a front row seat the first few kilometers of the run, as the course winds through Naha City streets.  Thousands traditionally line the streets to cheer on the runners, which has become a forum for domestic and international camaraderie.  Runners have a maximum six hours, 15 minutes, to complete the Naha Marathon.

Sunny skies with no chance of rain is the weather prognosticators’ view of Sunday.  Temperatures are expected to be about 18C at the race start, warming to about 20C by the time runners cross the finish line.

The Naha Marathon has come far from the first iteration on Dec. 8th in 1985, when 5,139 runners battled the rain and 19.7C temperatures.  Of those, 95%, 4,301, completed the race.  Today, about two-thirds of the runners jumping off from downtown Naha finish the race.