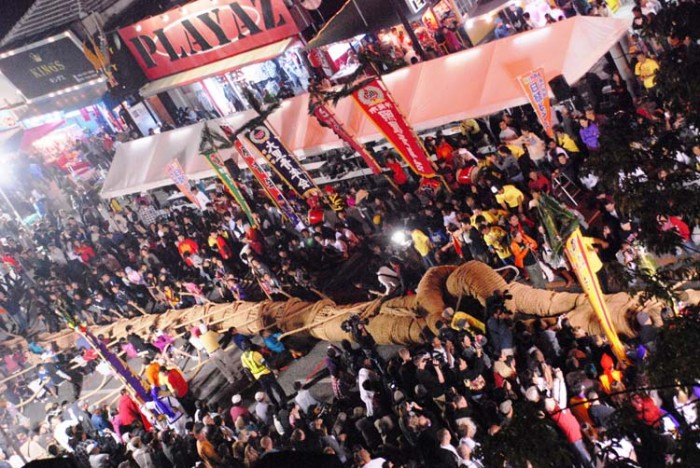 The highlight of Okinawa International Carnival is Saturday’s Tug-of-War.

Santa Claus is coming to town this weekend, and his debut is just the tip of the entertainment options at the Okinawa City International Carnival.

The new Santa Claus Carnival will add even more excitement to this annual event, which runs Saturday and Sunday at the Koza area’s Gate 2 Street.  The festivities kick off at 11 a.m. Saturday and 1 p.m. Sunday. 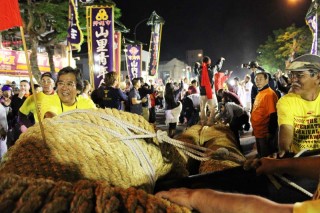 Although the rope is a bit smaller at International Carnival tug-of-war, the fun is at least as big as in Naha’s event.

The first day of the International Carnival will feature an international parade with participants from various countries, including the United States and Philippines, presenting their cultures through performances. It’s also the time when Santa Claus, accredited by Greenland’s “International Association of Authorized Santa Clauses”, will come and warm up the carnival-goers. 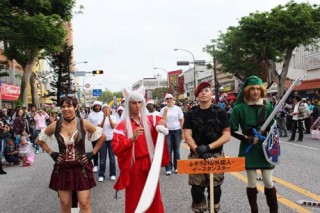 People taking part in the parade on Saturday are encouraged to dress up.

Sunday, motorcycle riders from all over the island will assemble on Gate 2 Street, which will be closed to traffic and packed with some 200 bikes for the occasion. The Gate 2 Festival, with the rumbling—and somewhat loud—accent of more than 200 Harley Davidson motorcycles on the street, runs concurrently this weekend.  The motorcycle parade takes place Sunday at 2 p.m., blending the cultures of Okinawa, the United States and bikers of other nations.

The big events of Saturday afternoon are 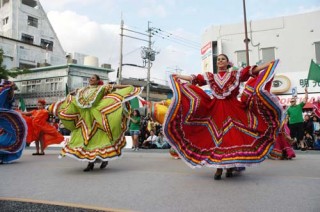 Folk dancers representing various countries are also a part of the international fun.

the International Great Tug-of-War, a carnival parade and The Samba Queen Contest.  It’s a scaled down rope pull that’s put Naha City in the Guinness Book of World Records, but Okinawa City locals say theirs at 6 p.m. Saturday is just as much fun.  Pre-tug of war performances will include music and karate demonstrations.  The tug of war is open to all spectators, although young children should be kept clear of the rope.

A rock concert and dance performance are also on the Sunday program. Another fascinating draw is the Pro 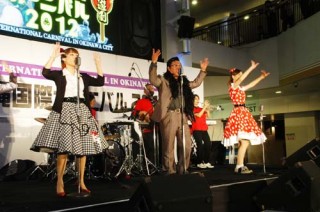 Bands perform live on both days on special stages set up on Gate 2 Street.

Wrestling exhibition. There will be dozens of food vendors and souvenir stands available to spectators, each offering a specialty unique to Okinawa, America or another country.  Games and activities for children will be plentiful as well.

Organizers emphasize that streets and roadways will be subject to traffic restrictions during the weekend event.  They also encourage people to park a distance away, because parking in the immediate Chuo Park and Gate 2 Street areas is very limited.  All of Gate 2 Street, which is Highway 20, will be closed 10 a.m. ~ 9 p.m. both days. Saturday one lane on Route 330, as well as part of Culture Center Street will be closed 2 p.m. ~ 9 p.m. All of Park Avenue / B.C. Street will be closed on Sunday afternoon 2 ~ 2:30 p.m., and two lanes on one side of Route 330 will be close 1:45 p.m. ~ 2:15 p.m. Sunday.