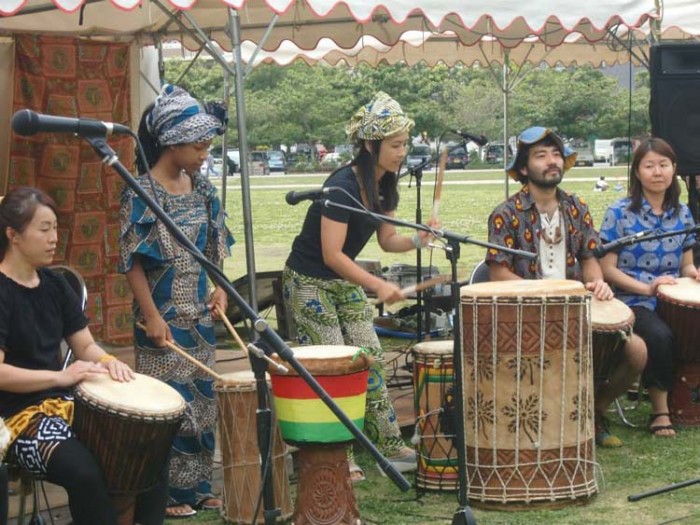 Band Amina playing at Antaru Festival in May.

A festival aimed at promoting understanding and respect for one another is on tap this weekend at Shintoshin Park in Naha City.

The two-day event runs 10 a.m. ~ 7 p.m. Saturday and 10 a.m. ~ 6 p.m. on Sunday, with the focus on using food, music and art to express one another.  The festival is free at the park, located behind the Okinawa Cultural Museum & Art Museum. 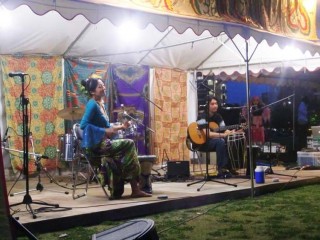 The Antaru Festival begin on 2007 at Sasaki Park’s open stage in Tokyo, with the name  antaru drawn from Ghana’s Hausa language, meaning “to gather.” Organizers set the goal as “We are all individuals who come from different countries, tribes, age, gender, thoughts and color of skin. To understand, respect and take in one another, the world would be a better place, and that is the motive to our antaru!

The Antaru Festivals were so successful, they migrated to Okinawa, where the festival drawn good crowds. The last was in May, and organizers say this weekend’s event will only be stopped if there’s stormy weather.

Osman Orlando Bingle, the organizer, thinks the world will become better if people understand the differences between each other. “If so,” he says, “let’s do something fun together!” This is the main theme of “Antaru Festival”. Orlando is originally from Ghana, migrating to Tokyo in 1988. He is a player of “Palogo” drum, a prototype of the conga of the fishermen of Ghana, and also called the root of the “talking drum” used to transfer messages in Africa, and samba.

Since his first visit to Japan, he has organized the Antaru Festival in many places, including schools, TV and radio, and is also carrying on producing the ANTARU FESTIVAL in Yoyogi Park. In order to build nursery schools in his mother country Ghana He has been involved in other charity activities, and is the owner of cafe bar “ANTARU CAFE8″ that was opened in Asagaya, Tokyo He lives in Okinawa now and has left the cafe to the staff in Tokyo. He now has Antaru Café in Ginowan.

An exhibition sale of unique art works besides live music by musicians active not only in Okinawa but also in mainland Japan is in the program, and there’s also a food court where visitors can enjoy various ethnic dishes.