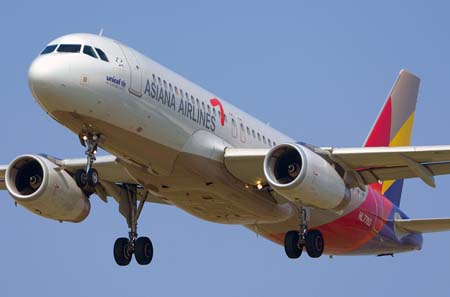 Asiana also flies a route connecting Naha with Korea’s capital city Seoul.  Round-trip services are being offered between Okinawa and Busan on Tuesdays, Thursdays and Sundays.  The airline had initiated a three-month test on the route’s feasibility early this year, and concluding it was financially viable, reinstated the flights early November.

The airline is flying Airbus A320s configured with 155 seats.  Asiana officials say they had a 53.5% occupancy rate on the first day’s flight from Busan to Naha, and 72.9% on the return flight to Busan.  Asiana’s branch office manager says the airline’s goal is a sustained load factor of 75%.

The head of the Okinawa Convention & Visitors Bureau, Yoshyuki Uehara, was on hand to praise Asiana on the first day’s flights.  He was joined by Seijun Waukawa, head of the Okinawa Prefectural Government’s Department of Culture, Tourism and Sports.

Pleased by the attention focused on the latest carrier to use Naha International Airport, the manager of Asiana’s Okinawa office, Seok-je Kim, said, “Okinawa is the closest subtropical resort area to South Korea. I want many Okinawan people to take advantage of these flights because Busan is the second-largest city in Korea, and has quite a different culture to that of Seoul.”