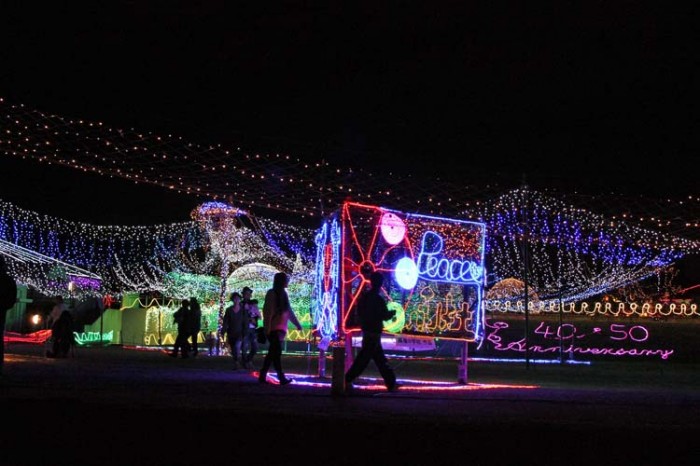 Proliferation of LED lights has resulted in light displays being everywhere in Okinawa during the year-end season with some continuing well into the new year.

Santa’s now making his list and checking it twice, while here on Okinawa the holiday spirit is brightly burning with multiple spectacular lights displays and shows.

From northern Okinawa to the far south, cities and businesses are showcasing their holiday extravaganza events. There’s something for everyone, and countless opportunities for shutterbugs to capture memorable photographs.

There are actually two programs in Itoman, the Itoman Peaceful Illumination Festival and the Peace Illumination, which runs through January 3rd from 6:30 p.m. -10 p.m. at Okinawa Peace Memorial Park, Mabuni. Admission free 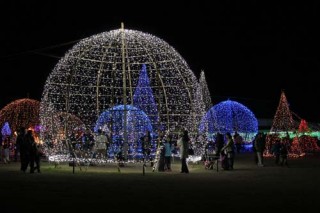 Itoman Peaceful Illumination is the oldest on Okinawa, now on its 15th year.

The 15th Itoman Peaceful Illumination Festival is under way, a festival dedicated to prayers for peace. More than 1.3 million miniature lights have been lit in Mabuni, Itoman, site of where the 1945 Battle of Okinawa came to an end. Organizers call the festival an event “sending to the world Okinawa’s prayers for peace.”  The event takes place through January 3rd at the Itoman Tourist Farm, 1018 Mabuni, Itoman City, from 6 p.m. ~ 10 p.m. nightly.  Admission is ¥250.

Prayers take place each evening at 8 p.m. as the festival conducts a ‘starlight wink’ where all illumination 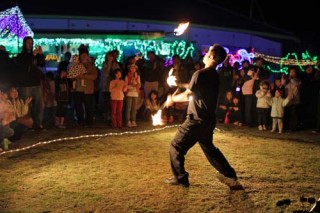 Some illumination events feature live performances, like this fire juggler in Itoman Peaceful Illumination, or live bands, mostly on weekends.

is turned off once, then lit back again. More than 120,000 visitors are expected during the illumination run. Two live concerts are slated for Christmas night and New Years Eve, with both featuring fireworks. A New Year’s countdown will be broadcast live on Okinawa television.

Even as the Itoman Peaceful Illumination is set to begin, plans are being finalized for the Mabuni Fire & Bell Observance New Year’s Eve into New Year’s Day. The ceremonial festival takes place at Okinawa Peace Memorial Hall, which also stands in Mabuni, with prayers being offered to the 230,000 who died during the Battle of Okinawa. Just before the new year arrives, moments before the stroke of midnight, the flame of prayer will descend from the 45-meter-high bell tower to light participants’ torches as they welcome in the new year. 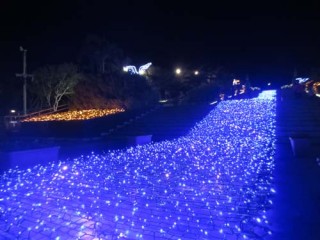 Winter Fantasy in the Expo Park features live music on Dec. 21, 22 and 23 in addition to voluminous display lights.

Christmas Fantasy springs to life again at Okinawa City’s Zoo Park, a holiday special event bringing smiles to adults and children alike. It’s the only place on Okinawa where visitors get to play with snow… really real snow… snowballs… a slide and more. Tickets to the Christmas Fantasy cost ¥1,700 for adults and high school students and ¥1,000 for children from four through junior high school age in advance, and ¥2,000 and ¥1,200 respectively at door.  Both Kadena ITT and MCCS Tours have programs to take people to Christmas Fantasy. The event open Dec. 23rd and runs through the 28th. The year’s first snow will be the opening day of the annual Okinawa Zoo Park Christmas Fantasy. The six-day holiday special event will feature a taste of real winter, as fantasy creators open a snow amusement park and shelter made of snow, where visitors can play, slip and slide with a sleigh, and also get into snowball fights. The shelter’s made of real snow.

Okinawa’s best known laser show is a part of the Christmas Fantasy, a skillful blend of lasers, fireworks, snow and soap bubbles. The million dollar hill is the perfect place for watching the Christmas Fantasy illuminations. Okinawa Zoo Park will operate the lights, snow and firework super Aurora attraction from 4 p.m. ~ 9:30 p.m. each day, with events starting at 4:30 p.m.

Expo Park Winter Fantasy 2013 runs through January at Okinawa Expo Park, Motobu.  There is live music on Dec. 21st, 22nd and 23rd, and admission is free. 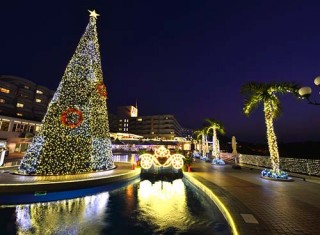 Kariyushi Resort & Ocean Spa in Kise, near Nago, has debuted its own Kariyushi Million Fantasy that features daily live entertainment and runs through the end of nest June.

Drives around the island will produce dozens of businesses who’ve lit up their properties for the holiday season, and hotels are turning up the lights, too. Kanucha Bay Hotel and Villas’ holiday display is worth the drive up Highway 58 to the north, where its eco-sustainable style of holiday lighting is in place daily from 6 p.m. The lights go on with a grade switching-on ceremony each afternoon at 5:55 p.m. The hotel complex has a giant 12-meter Christmas tree, plus an outdoor display of more than 100,000 colorful lights.  Kanucha Stardust Fantasia is lit to 11 p.m. at Kanucha Resort, Abu, Nago. Admission is ¥2,000/car in advance, ¥3,000/car at gate.

Renaissance Resort Hotel Okinawa, not to be outdone, has its Blue Ocean Fantasy and a 15-meter tall tree. The general public is invited to visit and view the illuminations throughout the holidays, and on through February. There are more than 80,000 LED lights and 13 brilliant blue porpoises who dance on the surface of the water in the swimming pool. Admission is free through February for Blue Ocean Christmas 2013 Garden Illumination, beginning at 6 p.m. each evening.

The Bach Tower Okinawa in Chatan’s Mihama area has a Christmas display running daily 5 p.m. ~ 1 a.m. Admission is free. Not to be outdone, the Christmas season has arrived at Mihama American Village, where the entire village is covered with Christmas lights. The youth town, ferris wheel, the movie theater and shopping area are all decked out with illuminations, including white Christmas trees made of white flowers. Look closely, as there are Santa Claus Christmas decorations and plenty of illuminations. The lights are on every evening starting at 6:30 p.m. through January 10th. Best of all, admission to the Mihama American Village area is free. 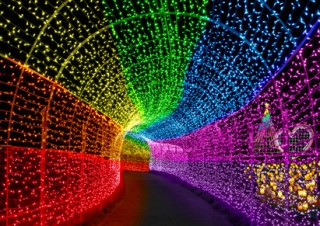 1000 Shining Dreams Garden Illumination is in progress to the end of the month from 6-10 p.m. at Toyosaki Seaside Park, Tomigusuku, a new illumination event starting this year.

Winter elegance 2013 is in place at Okinawa Outlet Mall Ashibina.  Admission is free for the festivities taking place nightly from 5 p.m. – 8:30 p.m. at Okinawa Outlet Mall Ashibinaa, Toyosaki, Tomigusuku.  The 1000 Shining Dreams Garden Illumination is in progress to the end of the month from  6-10 p.m. at Toyosaki Seaside Park, Tomigusuku. Admission is ¥300 for high school age and over, junior high school children and younger free.

The U.S. ~ Japanese Kids Holiday Art Festival is in progress through December     28th on Gate 2 Street and BC Street near Kadena Air Base.  Art students from Bob Hope, Amelia Earhart, Kadena and Searley Heights schools on base, plus schools in Okinawa City, are participating.  On December 22nd, live music is being presented by the Okinawa Community Choir, together with local talent, from 3 p.m. ~ 5 p.m. The Kadena Top 3 Okinawa Outreach, a newly formed committee on Kadena Air base, is supporting Okinawa City with the festival.