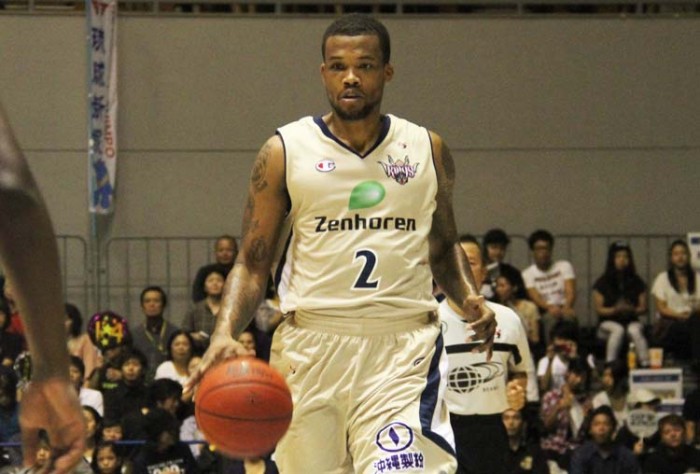 Draelon Burns caught fire on Saturday, but that was not enough to preserve the Kings’ winning streak, although Sunday was another story with the Kings winning 61-57.

The newest kids on the block, an expansion team from Aomori, threw the wrench into the high-flying Ryukyu Golden Kings Saturday, snapping a 12-game win streak with a squeaker 72-70 win in front of their home fans.

The Aomori Wat’s, sporting a mediocre 10-11 record in their first season, proved to be the spoiler against the Golden Kings, who suffered only their third loss of the year while sitting atop the Basketball Japan League Western Conference.  The Okinawa squad was hot in the opening quarter, but Aomori played strong to hold a 38-35 halftime lead, and held on for the remainder of the game. At one point, the Golden Kings trailed by 12 before Draelon Burns caught fire and narrowed the margin.

“Goden Klaiber, Stanley Ocitti and Yuki Kitamura were contained,” said Okinawa head coach Tsutomu Isa, “but it was the defense making mistakes that kept us under.”  It was defense on the mind of Wat’s head coach Koju Munakata, too.  “The game had ups and downs,” he said, “but the defense took care of it and we were able to make the points.”

Sunday was a different story, with the Golden Kings taking advantage of Aomori mistakes to win 61-57. Anthony McHenry hit for 19 points and 12 rebounds, along with four assists, two steals and two blocks.  Draelon Burns picked up 13. “We have to work on our offense from scratch,” said Okinawa coach Isa, because “we’re going for the championship”.  Okinawa returns to the friendly confines of Naha City Gymnasium for a home series January 2nd and 3rd against the Saitama Broncos, who are in the BJL cellar with a 2-20 record.  Okinawa begins the new year with a 17-3 record.

Elsewhere in the league, The Hamamatsu Higashimikawa Phoenix bounced back Sunday with a convincing 93-75 win after losing a day earlier, 99-88 in overtime to the Shinshu Brave Warriors.  The Phoenix are 12-10 while Shinsu is 14-6 going into the Christmas weekend break.  The Takamatsu Five Arrows picked up a pair of wins against the Saitama Broncos to improve to 10-10, 93-83 and 96-60. Likewise, the Yokohama B-Corsairs racked up a weekend pair of victories against the Shimane Susanoo Magic, 75-55 and 80-59