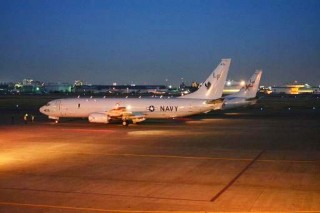 Two of the Navy’s new P-8A Poseidon reconnaissance aircraft have arrived at Kadena Air Base.

The P-8’s long-planned arrival in the western Pacific comes about a week after China unilaterally declared a broad swath of the East China Sea’s air space as its national air defense identification zone, and demanded that military and other aircraft identify themselves and file flight plans with the Chinese government.  Navy officials say the two patrol aircraft left Naval Air Station Jacksonville, Fla., on Nov. 29th, and later landed at Naval Air Facility Atsugi for refueling before touching down in Okinawa.

Navy officials say another four P-8s will arrive during the next few weeks.  Secretary of State John Kerry and Defense Secretary Chuck Hagel announced the unveiling of the new aircraft, a highly modified Boeing 737, several months ago.

The P-8 specializes in submarine detection and replaces the Orion P-3, which has patrolled the Pacific since its introduction in the 1960s. Experts say that while the P-8 will have new active sonar and periscope detection radars, the move is more about upgrading the airframe. The P-8A Poseidon is also designed to work with the under-development MQ-4C Broad Area Maritime Surveillance Triton drone. Defense officials have previously said that the drone will deploy in future years to Andersen Air Force Base in Guam, about 1,400 miles from Okinawa.

China’s new air defense identification zone has stirred mixed reaction around the Pacific. The United States, Japan and other Asian nations say  their military aircraft will not recognize the zone, which includes airspace over the Senkaku islands.  China also claims the uninhabited islands, which is calls Diaiyo, thought to be packed minerals, energy and food resources in surrounding waters offshore.